Wake up and smell the Pheromones!

Other therapies
by Animal Therapy Magazine

The use of Dog Appeasing Pheromones to reduce stress in dogs 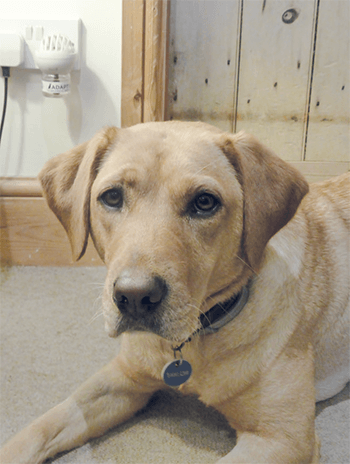 Just like people, stress can negatively impact dogs. There are a number of reasons why stress occurs, including changes in routine, separation from a care giver or a visit to the vets. Undesirable behaviours such as excessive vocalisations, destructive behaviour and inappropriate elimination can occur, with some of these unwanted behaviours causing a breakdown in the human-animal relationship. This breakdown can often result in owners relinquishing their pet to a rescue shelter. With large numbers of dogs in the UK being relinquished annually to already over-burdened shelters, reducing stress related behaviours is an increasingly important issue.

Many owners now seek an alternative to using drugs to manage stress related behavioural problems. A commercially available stress relief product, which can be used as an alternative to drugs, is the Dog Appeasing Pheromone (DAP) also known as Adaptil(R). DAP is a synthetic version of the pheromone produced by a lactating bitch to help reassure the puppy. The product comes in various forms including a plug-in electronically heated diffuser (which looks like a plug-in air freshener), a collar which is activated through body heat and also a spray which is portable and offers a flexible means of applying the pheromone. This drug free option is widely available from most pet retailers and Vets and is used to help dogs transition in new, unpredictable and potentially stressful situations such as during crate rest or restricted exercise during rehabilitation.

DAP has been suggested to be beneficial in relieving stress in dogs in a number of published studies. A study by Tod and colleagues in 2005 investigated the effects of DAP on the behaviour of shelter dogs. Thirty seven dogs were exposed to DAP diffused into the environment continuously over a 7 day period where they were subjected to two temperament tests used to measure fear, separation and excitable behaviour. The researchers found dogs exposed to DAP exhibited barking at a lower decibel and frequency combined with increased resting behaviour although many behaviours also remained unchanged such as body postures, growling, whining and displacement behaviours. Whilst the researchers suggested that DAP may be a useful tool in reducing stress and anxiety, they recommended that further research was required which combined exposure to DAP alongside behavioural modification. A few years later in 2007, Levine and colleagues found that DAP combined with a behavioural modification programme such as desensitisation training was found to be a more effective, long term solution for behavioural problems relating to fear of fireworks.

More recently in 2015, Landsberg and colleagues tested the effects of a DAP collar in reducing noise induced fear and anxiety in 24 laboratory housed beagles divided into two groups, DAP and a placebo. Dogs were initially exposed to a laboratory controlled thunderstorm simulation and assigned to either the DAP or placebo group which was balanced using dogs that showed a range of fear scores. Dogs were then fitted with either a DAP or placebo collar and exposed to two further thunderstorm simulations on consecutive days where researchers measured fear and anxiety on a scale and also measured how much time dogs spent hiding in a box. Fear and anxiety scores significantly reduced in dogs during and after the thunderstorm simulation when they were wearing DAP collars compared to the placebo group. Dogs exposed to DAP also used their hiding box more frequently which the researchers suggested may be a response by dogs due to increased reactions to the thunder. The results of this study would suggest that DAP helps calm confined dogs exposed to loud noises and should be used in conjunction with a hide in a home environment. 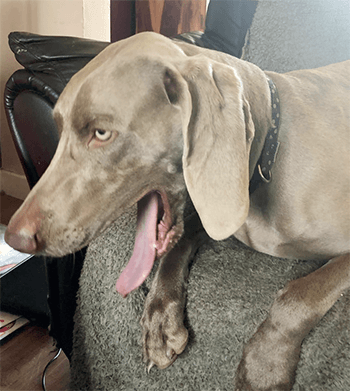 Some of the more subtle signs of stress can include yawning.

DAP may not appear to calm and reduce stress in all individuals however. In 2016, Broach and Dunham aimed to test the efficacy of a DAP collar in reducing stress in military dogs transitioning from a foster home. Dogs were allocated to either a DAP treatment or placebo group. The treatment group wore DAP collars for four weeks and behaviour was measured at three time points, prior to application of the collar and at 3 and 5 weeks. A performance observation was also conducted in week 3. No reduction in stress related behaviours were observed in either of the groups. The authors recommended that a multimodal approach should be considered in future research that evaluates stress reduction in dogs, whereby a combination of environmental factors, behaviour modification, nutritional, pharmaceutical supplements and medications are taken into account.

To add to the existing research in the field of pheromonal research, Hermiston and colleagues in 2018 investigated the effects of DAP spray upon reducing vocalisations and stress related behaviours in a shelter environment. Twenty five pure and mixed breed dogs were allocated to an order of conditions depending on when they arrived at the shelter. Longer resident dogs were exposed to DAP spray first and then on the consecutive day no DAP was present. Shorter stay dogs were exposed to no DAP first and subsequently the DAP condition. In the DAP treatment, each corner of the kennel was sprayed with two pumps of DAP spray. Another dog unknown to the test dogs was led past the kennel to induce a behavioural response so any effects of DAPs could be measured. The researchers recorded barking intensity, frequency and also the occurrence of stress related behaviours such as low posture. Whilst barking intensity marginally reduced in the DAP condition, a reduction in barking frequency and stress related behaviour was not observed in either condition.

Common Signs of Stress in Dogs:

Behavioural indicators of stress in dogs can be overt and very obvious or much more subtle. Often, a combination of stress indicators occur at the same time. There are common signs of stress to look out for, which include:

Some of the more subtle signs include:

The authors suggested that such a small change in barking intensity was difficult to interpret as being beneficial to welfare. There was also a lack of support from other stress indicators to suggest that DAP reduced stress related behaviour in this particular study.

Although research in the field has methodological limitations that make it challenging to determine pheromones true effectiveness, there are other factors that influence efficacy, especially in relation to kennelled dogs. Previous studies have reported large individual variations in behaviour (Hubrecht, 1995 and Titulaer et al. 2013). Also temperament (Jones and Gosling, 2005) and coping style (Stephen and Ledger, 2005), which can be attributed to genetic factors such as breed and sex (Serpell and Hsu, 2005) and to environmental factors such as experience (Appleby & Plujimakers, 2003), rearing environment (Harvey et al. 2016), and neuter status can all impact how an individual dog perceives stimuli and should be considered when evaluating research findings.

These indicators may occur for a number of reasons and in different contexts, therefore it is recommended to seek advice and help from a qualified Behaviourist or Vet if your dog shows signs of a behavioural problem or stress. If you do need to approach, handle or treat a stressed dog, there are ways you can potentially help reduce stress:

DAP can be easily applied both in the indoor and outdoor environment. In an indoor environment, DAP can be applied through using an Adaptil(R) diffuser. You simply plug the diffuser into an electrical socket in the room where the dog spends most of their time, switch it on and leave it (the product takes up to 24 hours to dissipate into the environment and for any effects to be seen). For a portable alternative, an Adaptil(R) collar can be fitted on the dog or a spray can be used if the dog is anxious in an outside environment (for example, on walks, in a pet carrier or in the car).

So should we use DAP?

The research to date that investigates the efficacy of dog appeasing pheromones suggests that the product has some success in relieving stress in dogs although this may be dependent on factors such as temperament and coping style. Research suggests DAP should be used in combination with a behavioural modification programme and stressful environments should contain places to hide for the product to be most effective in reducing stress in dogs. DAP products are easy to implement, are a drug-free alternative and there are no known side effects although products need to be bought regularly for longer term use which can be costly.

It is important to note that, with any behaviour modification, DAP isn’t a quick fix. A change in behaviour is not always seen and sometimes the problem may not always be rectified. As behavioural problems can also be caused by medical issues, it is always advisable to have the dog thoroughly checked by a Vet before implementing a behavioural modification programme.

Broach, D., & Dunham, A. E. (2016). Evaluation of a pheromone collar on canine behaviors during transition from foster homes to a training kennel in juvenile Military Working Dogs. Journal of Veterinary Behavior: Clinical Applications and Research, 14, 41-51.

Levine, E.D.; Ramos, D.; Mills, D.S. (2007). A prospective study of two self-help CD based desensitization and counter-conditioning programmes with the use of Dog Appeasing Pheromone for the treatment of firework fears in dogs (Canis familiaris). Appl. Anim. Behav. Sci. 105, 311–329. 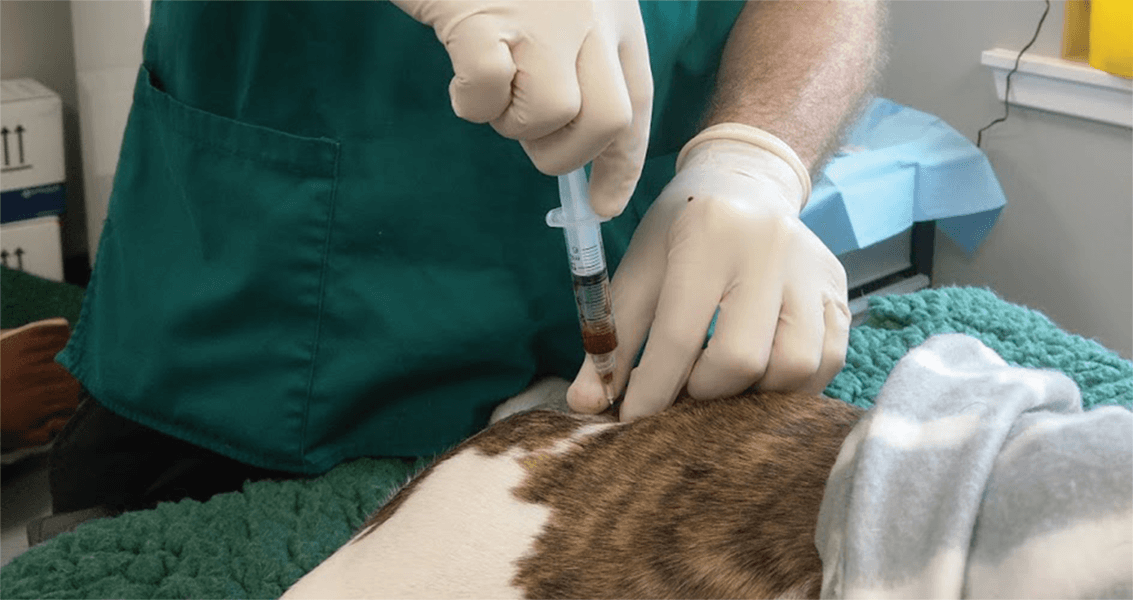 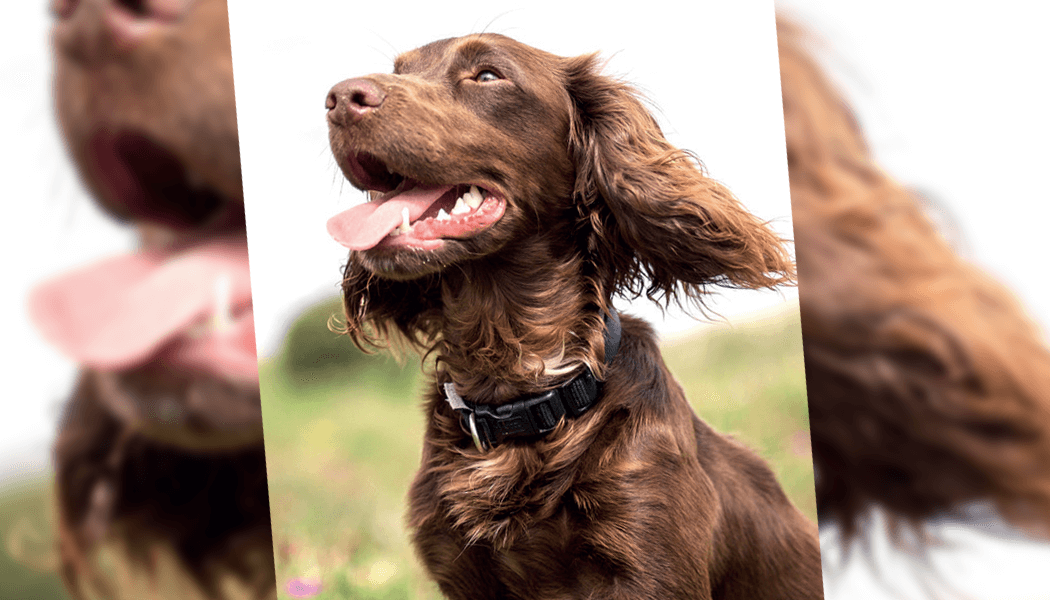