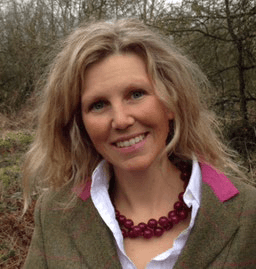 Physiotherapist Megan King is part of the horse health team that supports Canadian Olympic event rider, Rebecca Howard, her longtime partner, Riddle Master, ‘Rupert’, and an exciting string of up and coming event horses at her Wiltshire training base. “I visit Rebecca’s yard weekly to assess and treat Rupert, as well as the up and coming horses in her training and competion program”, Megan explains.

“Leading up to the 2016 Olympic games, we started looking at ways to support Rupert on his travels to the games. We explored ways we could make his long journey by road and air as comfortable as possible so he could arrive feeling fresh and rested”, Megan continues.

“The goal in these long transport situations is to be proactive with healthcare in the lead up to the departure and make sure you have the healthiest horse possible getting on the plane”, Christiana explains.

Rupert’s travelling groom, Angela Molson agrees: “The home team worked tirelessly to give Rupert the best possible run up to the Olympics and ‘Rup’ was in tip top shape to travel”.

“I was really excited to work with Megan on kinesiology tape applications to support Rupert during his travel to Rio - collaborating with other professionals is always rewarding”, explains Harriett.

“Harriett and Megan working together to find taping applications that would assist Rupert’s muscles and circulation during his transport is just another example of the detailed program put together by a dedicated team. Harriett arriving at the crack of dawn to apply fresh tape on the morning we started the journey to Rio was a lovely send off”, explains Angela. 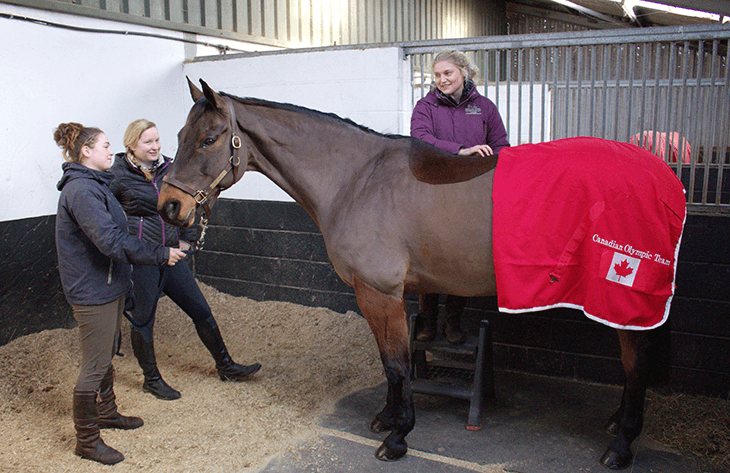 “With all taping clients, we do an allergy test where the horse wears a sample piece of tape for 24 hours”, Harriett explains.

Athletic applications can help horses progress in their fitness and training, bring awareness to weaknesses or imbalances in development, support muscles as they adapt to an increased workload or explore a greater range of movement.

Tape should never be used when there is an open wound, an infection or under circumstances where an increase in circulation would be contraindicated. 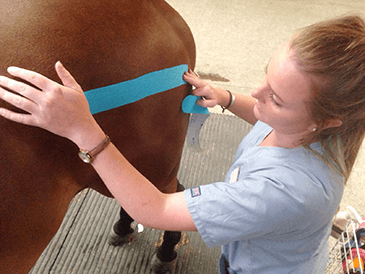 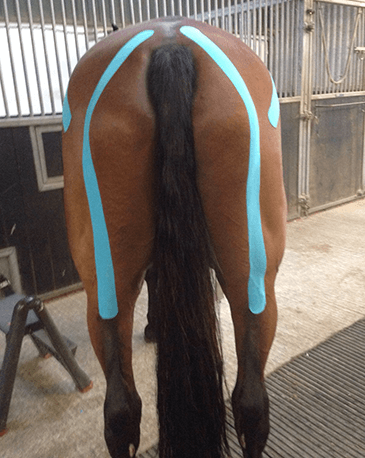 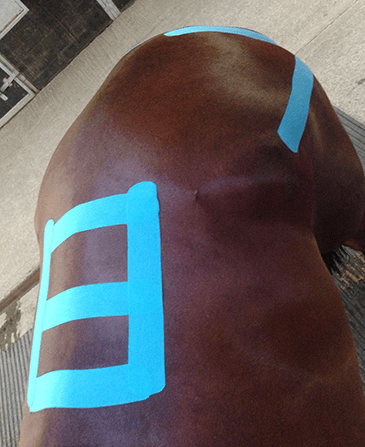 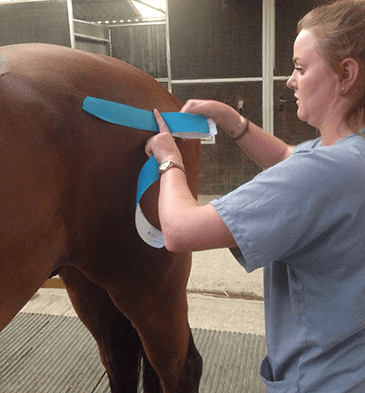 Before applying tape, the horse’s coat needs to be clean and dry. The cleaner the horse, the better the attachment the adhesive on the tape will be able to make, which ensures an even, consistent application.

On a clean coat, preparation is as simple as wiping the horse with a microfiber cleaning cloth to pick up dust and create a smooth, even surface for the tape.

Tape can stay on when the horse is washed, be worn under rugs and depending on the application, can be worn under a bridle, head collar or saddle.

“I advise my clients to avoid using coat conditioning shampoo or tail spray in the days leading up to a taping application as the ingredients can repel the tape”, explains Harriett.

What is kinesiology tape?

Kinesiology tape is a latex-free decompression sports tape made of elastic, two-way stretchable cotton with adhesive on one side that can be applied directly to the horse’s coat. Depending on the application and therapeutic aims, some tape may stay in place for up to four days.

The medical-grade adhesive on the back of the tape allows it to stick to the horse and works in two stages: the primary adhesive is warmed by rubbing with your hands, while the secondary adhesive is activated as it warms through contact with the horse’s body.

Elasticised therapy tape mimics the skin’s own behaviour, stretching and contracting as the horse moves.

The theory behind sports taping is that as the tape lifts the skin blood flow is gently increased, allowing better lymphatic drainage and improved cell regeneration. This increased blood flow can also help dissipate and ease muscle spasms, reduce swelling and bruising, and speed up natural recovery and healing processes.

Tape can also help to re-educate muscle memory and support the normal functions of tendons and joints, which can help boost range of movement. 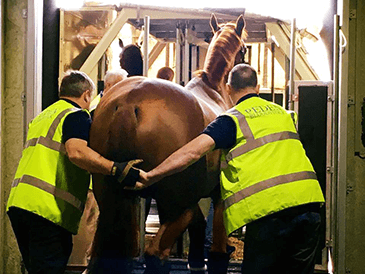 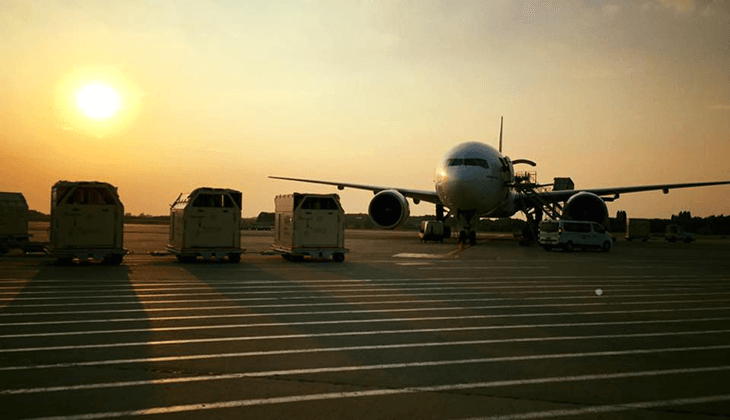 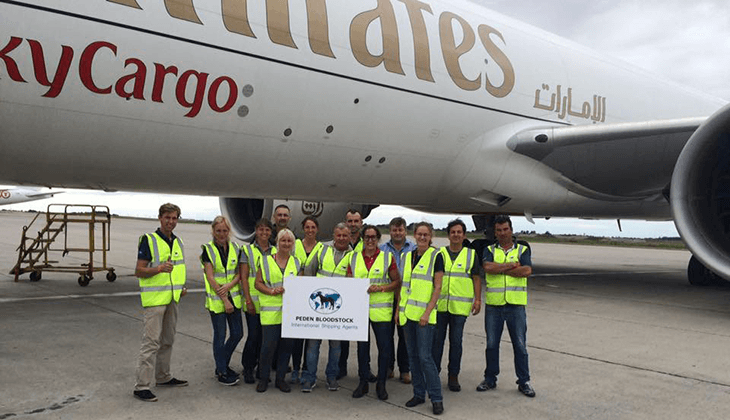 Five tips for supporting your horse during travel

What it targets: Gluteal muscles The tape was placed from the tuber coxae to the greater trochanter of the femur. The tape was applied with 100% stretch as a supportive technique.

Reason for application: The gluteal muscles support the flexion of the hip joint; retracting and abducting the hind limb. Supporting this large muscle group during travel helps the horse stay comfortable while standing for long periods of time.

What it targets: Semitendinosus Tape was applied roughly from the first caudal vertebrae (the origin of the muscle) to the caudal aspect of the tibia, where the muscle inserts.

What it targets: Tape was applied to the thoracolumbar region transversely across the longissimus muscle across the vertebrae with medium tension, overlapping the end of the tape provides further support on the outer limit of the application. 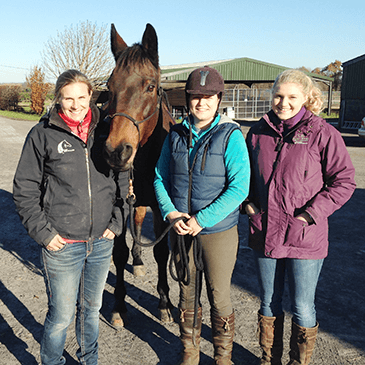 Travel application: This application aims to provide stability and support during sway and weight rebalancing during transport. The longissimus muscle aids in extension and supports the vertebrae column, stabilisation of this this will help to control and support the movement of the horse during travelling.

First leg of the journey to Rio

The first part of the journey to Rio was by road. A lorry and professional driver arrived at Rosegarth in Wiltshire early in the morning to collect Rupert. His feed, a HaygainGo and a complete wardrobe of rugs and competition gear had been loaded onto a truck the previous afternoon.

“I had butterflies as the truck pulled into the yard. It didn’t all feel real until the transport arrived and we loaded Rupert and set off on down the road. It was only then that I understood the magnitude of the trip and could believe that it was really happening!”, Angela explains.

“The road journey took a few hours and once we arrived at Stansted airport, we had a couple of hours to wait until we boarded. Luckily there was a patch of grass and Rupert was happy to wander around and graze”, Angela continues. 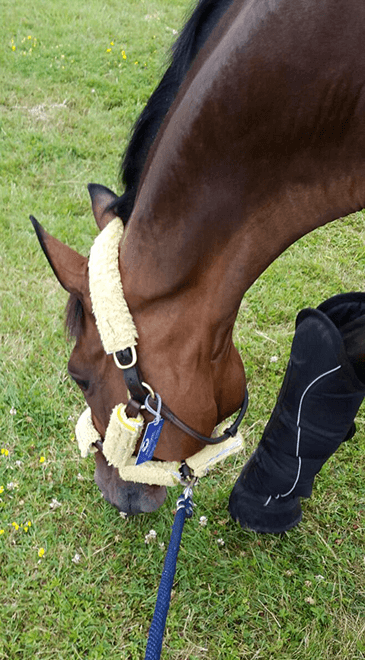 “Rupert was paired to travel in an air crate with the Japanese horse, ‘Just Chocolate’ who was travelling with his groom, Elliot Griffiths. We were flying in a cargo plane so it had a small passenger area behind the cockpit, where the humans were seated during take off and landing. During the flight we had free access to the horse area and were able to check the horses, just as we would on a long truck journey.

“The biggest challenge with lengthy transport is the risk to the respiratory system. The likelihood of the bacterial infection known as ‘shipping fever’ increases exponentially with 12 hours or more of travel”, Christiana explains.

“As the horses are loaded onto pallets, lifted into the plane and during takeoff and landing, their heads must be tied up for safety reasons. Once the plane is in flight, we do everything we can to give them the freedom to lower their heads by loosening the ties, feeding and watering them from the ground. Essentially, a lowered head position allows them to clear their lungs.

“The environmental temperature is also kept quite cool during travel and we manage the horse’s body temperature carefully with rugs. The goal is to minimise stress and keep as close to a normal routine as possible under the circumstances, Christiana explains.

Something from the trolley?

“I brought a whole bag of carrots and apples to feed Rupert during the flight to give him added moisture and nutrients and tempt him to keep eating his hay and feed. Rupert drank a good amount of water, which was really reassuring. Normally quite a fussy eater, Rupert was really settled in the air and managed a whole meal on the flight out and again on the flight back”, Angela explains.

“When I was feeding him or offering him water, I would unclip Rupert from the cross ties and encourage him to put his head down. This helps him stretch his muscles and drain any build-up in his airways from having his head upright for too long a stretch”, Angela continues. 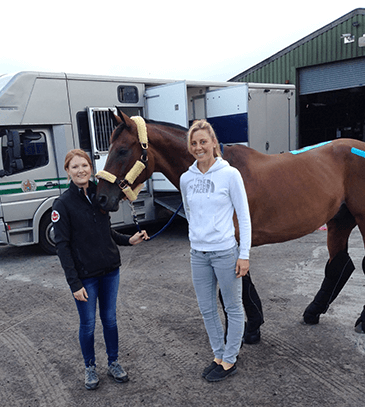 “This flight was amazing. The horses all travelled incredibly well and the logistics were seamless. Peden is such an expert at transporting horses; they do months and months of work to preapprove and preauthorise with the regulatory authorities so when the flight lands, the officials are there ready with paperwork and behind them there are a row of lorries waiting to take the horses to their stables. It is a very slick operation”, explains Christiana.

And how did Rupert feel upon his arrival in Rio? “Rupert leapt down the ramp and dragged me up the walkway when we arrived in Brazil. It’s like he knew where he was and the magnitude of the event and was saying ‘here I am!

Bring it on!’ He had an easy couple of days after the journey, but he was eating and drinking well and certainly showed he had a spring in his step throughout the competition”, Angela explains.

Following Rebecca and Rupert’s convincing top ten finish, Angela and Rupert arrived back home to Wiltshire in the middle of the night less than 24-hours after leaving Rio.

“Rupert was unloaded from the lorry and settled in to his stable to drink, roll and have his temperature taken. At first light, he was turned out in his paddock, where he soon cantered off to roll in his favourite sandy spot. My husband Tim was waiting for me at the stables with a flask of hot tea and a bit of chocolate - though we loved every minute of our adventure, I think both Rupert and I were glad to be home!”, Angela laughs. 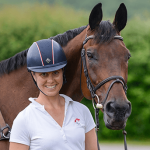 Rebecca Howard is a UK-based Canadian high performance event rider with results at Luhmulen, Badminton, Burghley and Kentucky and has doubleOlympic, Pan-American and World Equestrian Games experience. Rebecca’s top ten finish at the 2016 Olympic Games in Rio made her the highest placed female eventer at the games.

Nearly a decade later, Rupert is a polished athlete at the top of the sport with fans all over the world. 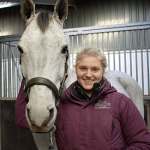 Megan qualified as a human physiotherapist in Western Australia before moving the to the United Kingdom to gain her Masters in Veterinary Physiotherapy and join the Association of Chartered Physiotherapists in Animal Therapy (ACPAT). Megan has worked with elite event riders, including Lucinda and Clayton Fredericks and Rebecca Howard, as well the elite horses on Australian, Canadian and Japanese teams. Megan has a keen interest in the relationship between rider and sport horse performance, as well as injury rehabilitation. 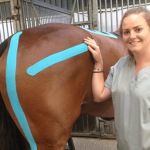 Harriett Freeman, BSc Hons, is a Equine Sports Massage Therapist EEBW, a certified Kinesiology taper with K-active taping and a Low Level Laser therapist. During her time as head girl at an event yard, Harriett Freeman applied her massage therapy and kinesiology taping skills to help keep the horses feeling fit and well. Harriett is doing her masters in physiotherapy and works at a small animal vet clinic. 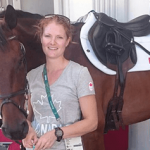 Freelance elite competition groom Angela Molson has worked with Rebecca at major events, like Burghley and the 2016 Olympic Games in Rio. Angela has taken the skills she developed grooming, like attention to detail, organisation, planning ahead and understanding what riders need to succeed into her new role as Equestrian Sales Manager for Countrywide Stores. When not devoted 24/7 to Rupert, Angela spends time with her husband, Tim and ex-racehorse Minnie, who is always immaculately turned out. 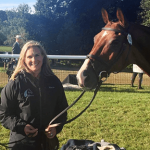 Dr Christiana Ober has 15 years experience in equine sports medicine and managing the competition horse. Her primary interests include: purchase exams, lameness, management and rehabilitation of soft tissue injuries, regenerative medicine, and sports medicine especially related to the threeday event horse. Christiana graduated in 2000 from the Virginia- Maryland Regional College of Veterinary Medicine and is FEI qualified as both a permitted treating veterinarian and as a veterinary delegate for three-day eventing. She is currently the vet for the New Zealand Three-day eventing team. 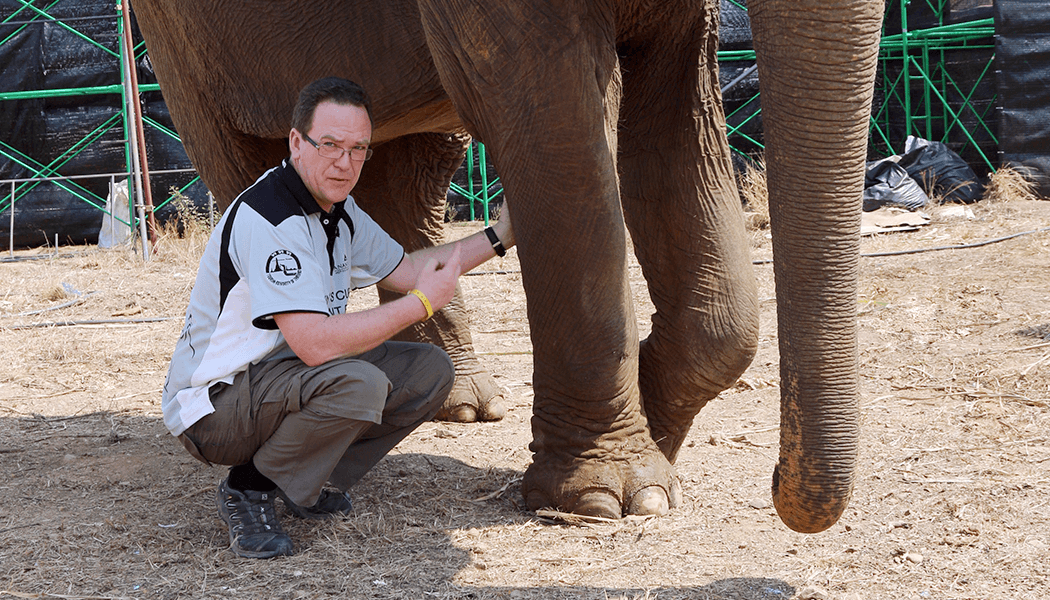 Osteopathy Coming to a screen near you 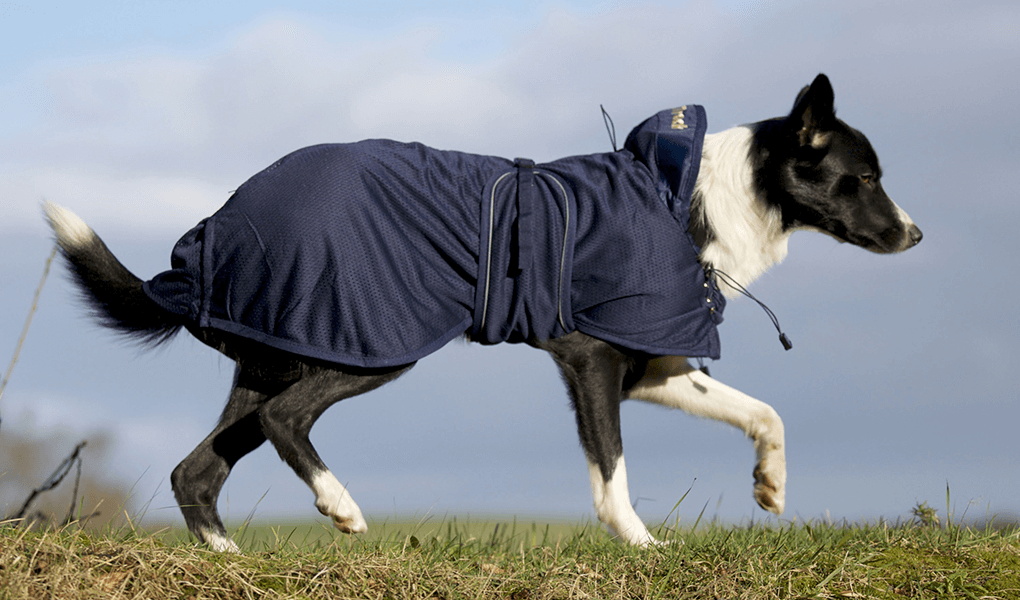 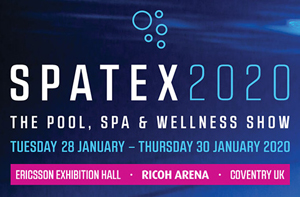