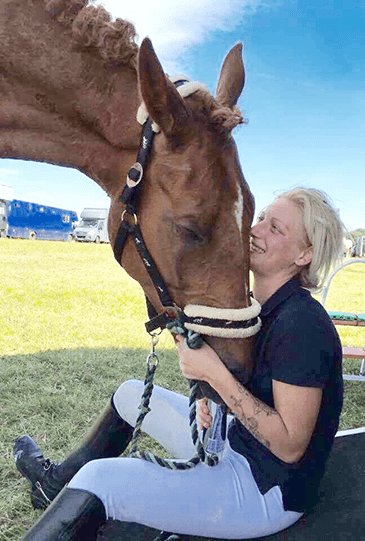 Since Photizo® Vetcare’s UK debut in 2013 more Vets, Vet Nurses, Physiotherapists and other alternative practitioners are embracing the potential of Photizo® Vetcare, and the benefits of Phototherapy.

From musculoskeletal injuries, atopic skin conditions, Photizo® Vetcare is also proving itself as an effective noninvasive tool in wound management.

Photizo® Vetcare boasts a powerful combination of pre-programmed 31 second doses of pulsating red and Infra-red LED Phototherapy. It ensures a fast delivery of an effective evidence based dose of light / Phototherapy, which speeds up the natural healing process.

Photizo® Vetcare creates biological effects at a cellular level to stimulate the production of ATP, the cellular energy that is needed for healing and cellular regeneration. Vetcare also increases the blood supply to the wound, muscles and joints, reducing swelling and inflammation.

Helping with pain relief via the stimulation of endorphin and serotonin secretion, the combination of light treatment with Photizo® Vetcare increases the blood and lymph diameter, thereby increasing the removal of debris whilst promoting the inflow of oxygen and nutrients, helping cells to function at optimum levels. 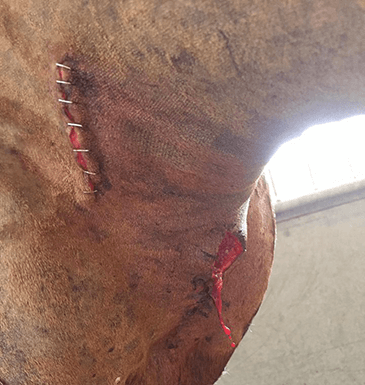 Photizo® Vetcare’s near infrared light has been shown to increase immune system functioning. This means that a local treatment of a wound or muscular injury has a general immune enhancing effect helping to prevent any infections.

Vet Surgeon, Berol Goede, helped develop the veterinary market in South Africa with cases studies on small animals, horses and wild-life (including cheetahs and a cockatoo). She explained:

In general veterinary work, the biggest use is bite wounds, chronic necrotic wounds and oozing abscesses. We use it to clean up septic wounds.

The unit is so simple and safe to use that it can be deployed at home by the animal’s carer or owner to accelerate recovery in between vet appointments or therapy sessions. 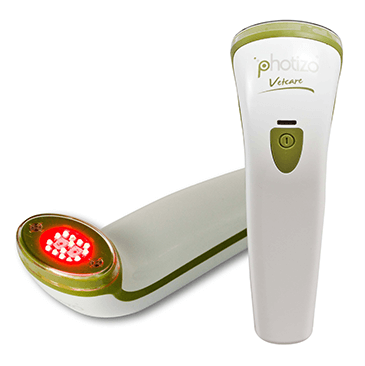 Eventer, Abi Dean, has incorporated Photizo® Vetcare into the pre and post work regime of her rescue horse, Nemo since the beginning of 2016. Nemo receives regular Photizo® sessions four to six times a week usually after hard exercise.

The journey to recovery that this brave Irish Sports Horse has endured is miraculous. It’s a testament to the care and rehabilitation offered by Abi, her vet, Ali Mead, and of course to Nemo himself. During his rescue in 2012 he suffered a severe fall, yet malnourished Nemo made a full recovery from a severed hoof and split knees.

Most recently Nemo has undergone surgery for 3 procedures including full laryngeal tie-back, hobday and soft palate cauterisation and Abi Dean is convinced that Photizo® aided his extraordinary recovery, she explained:

I believe that Photizo® rapidly improved the healing process after Nemo’s three procedures. Not only were the staples removed within the average time period, but the hobday open wound well-exceeded the rate of healing.

Despite being advised that the hobday would take anything up to 35 days from the date of surgery to heal, Nemo has been on 20 minutes of walking exercise since day five of Photizo® treatment, only 14 days after his major surgery.

As soon as Nemo was receiving Photizo® treatment there was a clear display in change of personality and appetite, he began to try to whinny, his general manner was improved looking more willing and happy, and he was maneuvering the neck more.

His appetite changed from one small bucket of hay 4 times per day to 8kg of hay three times per day fed in xxl bins at ground level. He displayed no signs of pain or discomfort while eating from day three.

Most horses spend a minimum of 120 days on strict box rest after this surgery. Nemo was given the all clear by Ali Mead, FEI Approved Vet (Badminton Horse Trials) to go back into full work on day 36 following the scope, which is less than one third of the normal recovery time for this type of procedure.

With a poor prognosis from the local Vet, Maureen and her daughter, Tracey Hilder, were in shock. Despite advice that if Mr Tom didn’t make dramatic progress in 48 hours, their only option would be to put him to sleep, neither were ready to give up on Mr Tom. 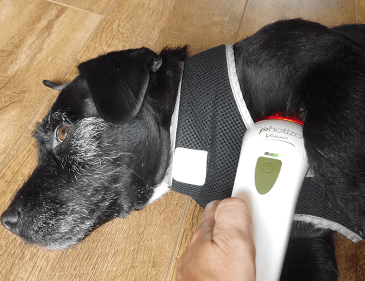 As Mr Tom was young, healthy and a typically naughty Terrier up until this sudden paralysis, Clifton Lodge Vets agreed to support Tracey through an intensive rehabilitation programme.

Without the funds for an immediate X-Ray, Tracey combined physiotherapy stretches, massage and hydrotherapy to help Mr Tom.

In addition to weekly sessions at the K9 World Hydrotherapy, Tracey invested in a spa pool at home. She invented a simple harness /sling to help him along and get him to toilet.

Slowly but surely Mr Tom regained the movement in his back legs. After four months the Vets were staggered that Mr Tom was trotting, toileting and back to his former self.

Disaster struck in April 2016 when Mr Tom’s paralysis returned. Tracey and the family were shattered as they’d all fought so hard to help Mr Tom walk again. 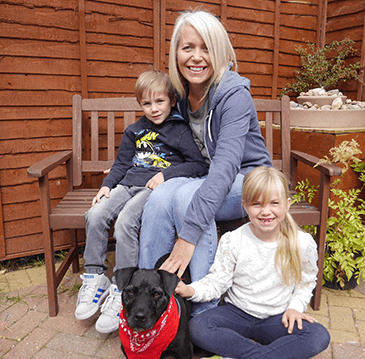 Not the sort to give up, Tracey read about healing potential of light therapy combining red and Infra-red LED Phototherapy at specific wave-lengths decided to give it a go.

In only four days using Photizo® Vetcare the difference in Mr Tom was miraculous. He was able to trot around the home and garden. Inspired by Mr Tom’s speedy recovery Tracey has continued Mr Tom’s daily light / Phototherapy treatment.

Five months on and Mr Tom is up and running! He happily plays with Tracey’s two children Ella and Evhan. He’s lost weight and his Vet, Moira Hamilton, at Clifton Lodge Vets is astounded at Mr Tom’s recovery.

Mr Tom is a strong dog and he wanted to walk again. Devastated by his set back, we prescribed anti-inflammatories to aid his recovery. Without the family’s commitment to get Mr Tom walking by integrating physical therapies and Photizo® Phototherapy, Mr Tom may not have been so lucky.

Tracey is so impressed with Photizo® that she is now fund-raising to provide Photizo® Vetcare to her local rescue kennels, including Stray Aid on Coxhoe and Helping Pets North East.

The convenience of Photizo® Vetcare is it’s a pocket sized rechargeable treatment tool. It is unique and appeals with its capacity to treat a large surface area with LED diodes. Unlike a laser beam, which transfers coherent, or near coherent light, LED emits a non-coherent light, which has a greater cover area. Whilst laser light can pose a risk to the eyes, with eyewear recommended, with LED light sources, there’s no risk, making its application much simpler and safer. 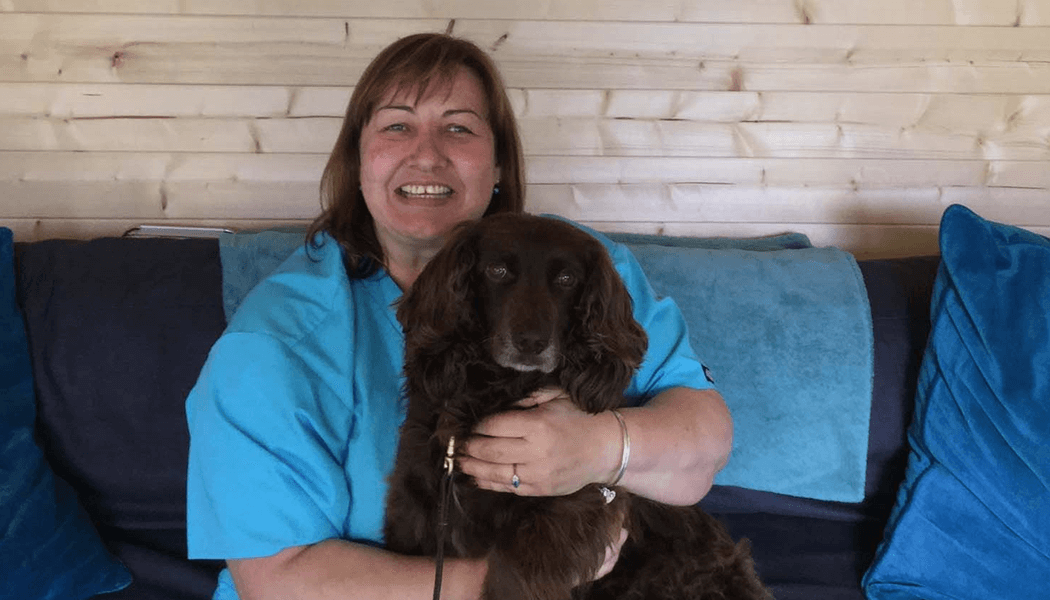 How Massage Guild Therapists and McTimoney can ... 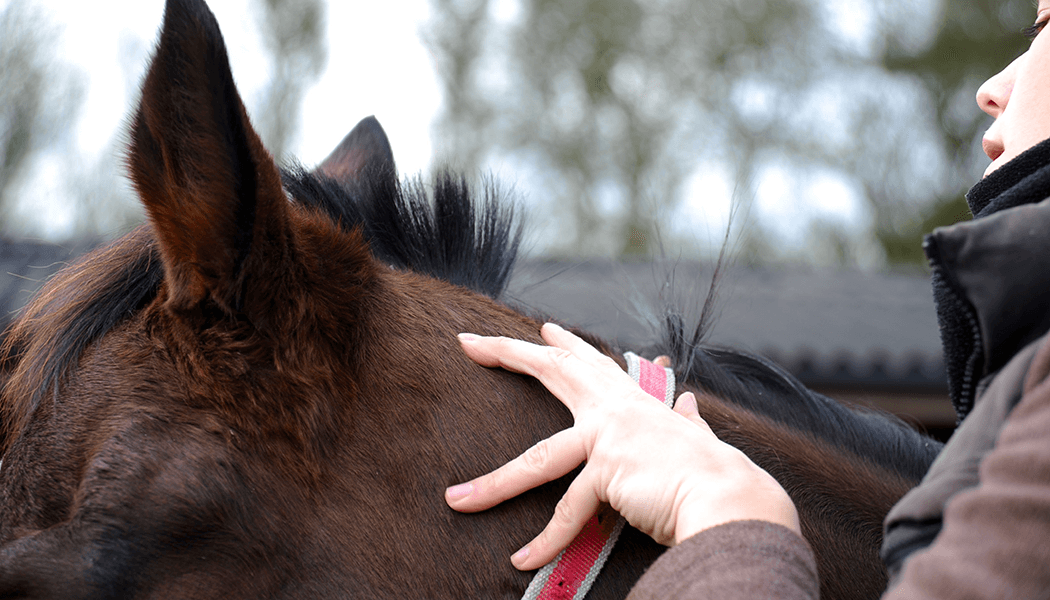 Effective, affordable and simple red light therapy for fast healing and natural pain relief for animals. Photizo run 'Photizo to the rescue' where a donation of a light unit is made to a nominated charity.