Photizo shines its light on an African dream

Helping horses and donkeys at the Gambia Horse and Donkey Trust

by Anna Webb on behalf of Photizo
Broadcaster, Author, Trainer has studied natural nutrition and therapies with the College of Integrated Veterinary Therapies (CIVT)

When veterinary physiotherapist and lecturer Danielle Barnes was invited to volunteer at the Gambia Horse and Donkey Trust (GHDT) she jumped at the chance, not just once, but twice and with a third visit in the planning. 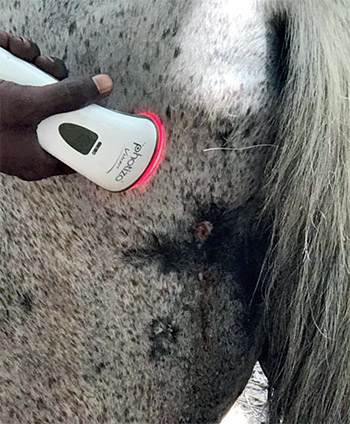 Wassadu Photizo treats his wound caused by a land mine explosion

The GHDT is a small charity registered in the UK and The Gambia. Founded by the late Stella Marsden OBE and her sister Heather Armstrong in 2002, the GHDT aims to reduce rural poverty in The Gambia by improving the health, welfare and productivity of working animals.

On both occasions Danielle’s aim was to combine her physiotherapy with her teaching skills and educate both the carers in the clinic as well as in the local community about the benefits of physiotherapy to equines.

Danielle Barnes explained: “ From the moment I arrived I was taken aback by the knowledge and experience that the Trust’s staff have regarding veterinary care of these animals. They work tirelessly to help the welfare of donkeys and horses that in turn play a massive role in the farming community. A healthy working animal can increase a family’s income by up to 500%, and buying an animal is a big investment for a family. Helping to keep their animals healthy in one of the poorest countries pays dividends for the whole community, not least the animals themselves.”

Packing a Photizo Vetcare with her on both occasions as Danielle was aware that this handy device was sure to come in useful. For her initial trip, The College of Animal Physiotherapy donated a unit for Danielle to take with her and leave at the GHDT for ongoing use. For the second trip, Danetre Health – the sole UK distributors of Photizo – donated another Vetcare unit.

The first trip was one where Danielle was able to expand the team’s knowledge by teaching the principles of physiotherapy, and when it can be used as rehabilitation to support the ongoing care already offered. The Photizo Vetcare being so easy to use became a point of interest straight away, especially as the results when using the red light device achieved such evident results.

Danielle enthused: “I have integrated Photizo’s Vetcare into my own practice in Hampshire for several years. Designed by physiotherapists for physiotherapists it promotes the natural healing for musculoskeletal conditions and wounds very efficiently. No doubt my visits to GHDT put the device to test on some extreme injuries and nasty wounds, but I’m pleased to say Photizo proved it’s worth everytime.”

One of the first residents Danielle helped at the Trust was a horse named Wassadu who had been a victim of a mine explosion. He had already been in the Trust’s care for a year and with careful rehabilitation he was doing well, and was quite a celebrity at the centre.

Part of his daily care and rehabilitation was to flush out his wound. Offering Photizo into the mix for his recovery helped not least to reduce any pain and inflammation, but to encourage blood flow, and the lymph system to get to work, encouraging the wound’s draining and promoting natural healing.

On Danielle’s second visit to the GHDT, Photizo was on hand at all times. One of her first cases was to assess the progress of a donkey named Jeeko who Danielle had treated on her previous trip. 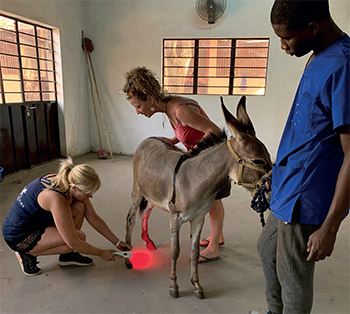 Demonstrating the healing power of Photizo.

Jeeko had suffered severe tendon damage. To conduct the current assessment of the tendon damage safely, Jeeko was sedated and laid to the most recent radiographs of the tendons, Danielle used an ultrasound for an additional picture of the tendons. Photizo Vetcare was used immediately to help relieve any inflammation and pain before Danielle proceeded with tissue therapies to encourage the tendons to stretch and aid weight bearing of the lower limb.

Similarly a donkey named Meredith who was a new resident was sedated before Danielle could proceed and offer a full assessment as to why she had such an unusual placement of her limb. Again Photizo was used prior to soft tissue work being applied to encourage the normal positioning of the limb.

It wasn’t only equines that benefitted from Photizo during Danielle’s second visit. The resident dog called Mack was very lame. Danielle used the trusty Photizo along with a range of movement and stretching techniques to make Mack more comfortable. Danielle recalls: “ Mack became so relaxed he nearly fell on me.”

The work at GHDT was hands-on from day one. Helping the team with their daily medication rounds, feeding, applying fly spray and fly fringes to the equines. Danielle explained: “ It was an honour to be so welcomed and given the chance to ‘get stuck in” from exercising some recently castrated donkeys, walking them around the centre to helping clean out and organise their storage and tack rooms. Perhaps one of the most rewarding aspects was go on a ‘trek’ with the team. We visited the local community helping administer worming and antibiotic treatments and carry out TLR and foot trims. One of the main objectives was to swap their handmade bits, which often cause damage to the tongue and lips, to ones donated from the UK and other countries.” 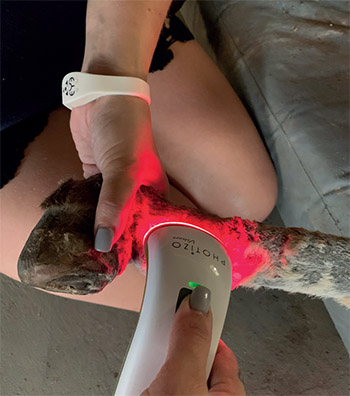 One donkey named Kembo captured Danielle’s heart from her first visit to GHDT. It goes without saying that his on going recovery was plain to see on her second visit. Kembo recognised

Danielle immediately the second time around and came running when she called his name: testament to Danielle’s midas touch. Benefitting from physiotherapy, massage and treatment with Photizo, his future looks bright thanks to Danielle’s expertise and the charity’s commitment to rehabilitate every equine in their care.

Using its pre-programmed doses of red and near infrared LED light, Photizo works at a cellular level stimulating a key receptor in the mitochondria to help increase the production of ATP in any damaged cells. Subsequent systemic effects are then observed to accelerate and promote an efficient natural healing process or to manage pain and inflammation in chronic degenerative pain conditions, especially for animals with compromised healing Ruth Milner, MD of Danetre Health commented: “Photizo is a modern phototherapy tool that uses the advancements in LED technology to maximum effect. From years of research it delivers scientific evidence preprogrammed doses of red light at the optimum frequency levels. Its success out in the field at home and abroad is down to its handy size and portability. But not least to the fact that LED light source is incoherent and therefore completely safe to use without the need for laser goggles. The science is building on the power of Phototherapy (photobiomodulation) as an infinitely adaptable and complementary modality.” 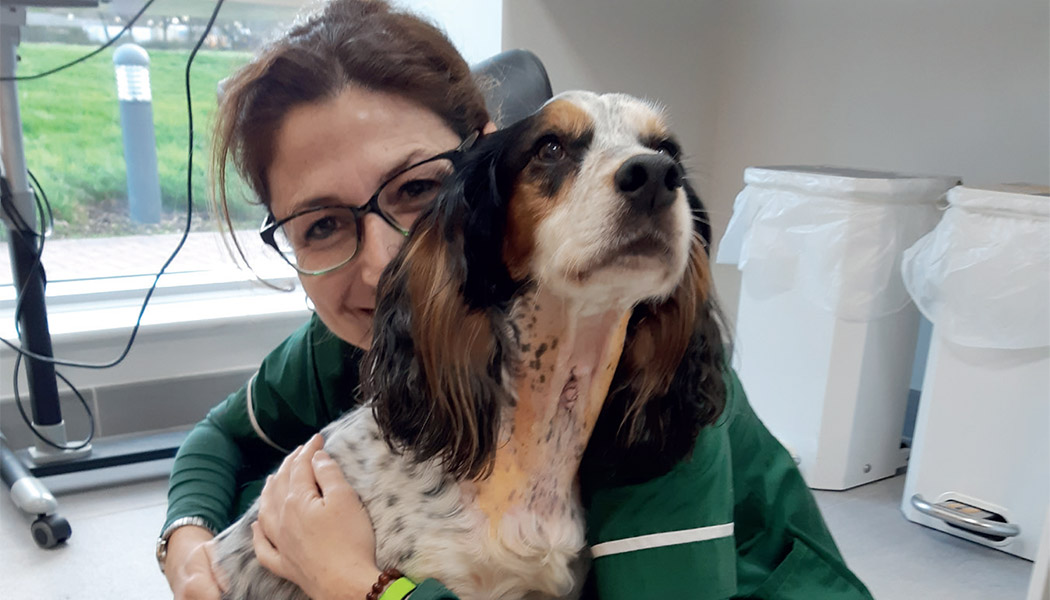 In conversation with Carla Finzel 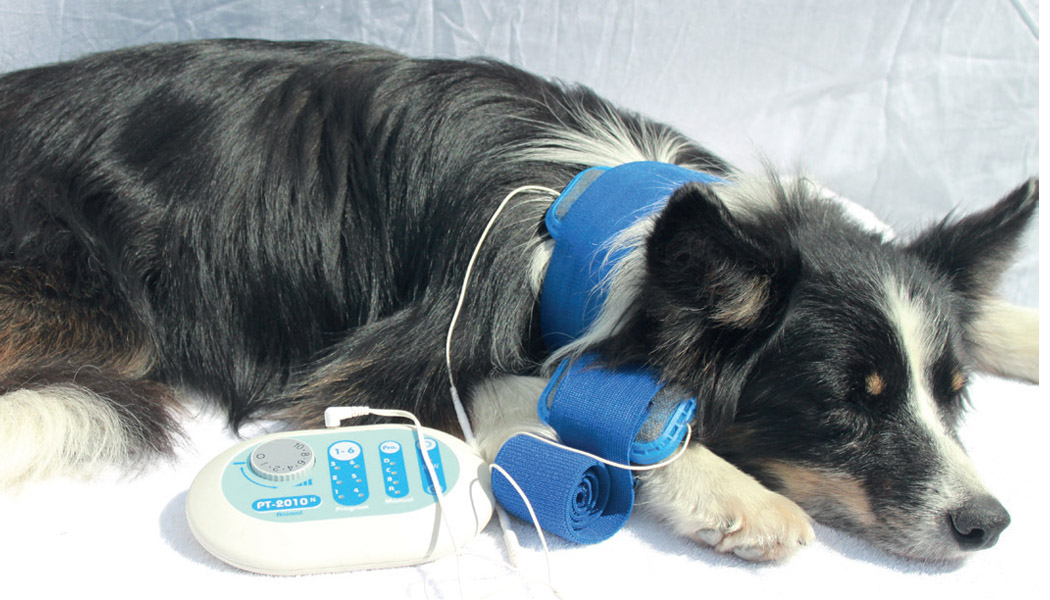