Dogs on the Streets – see the light! 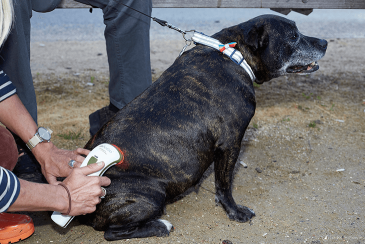 Dogs On The Streets London (DOTS) is a not for profit independent and voluntary ran ‘street-project’ that’s dedicated to helping the homeless and their dogs in London.

Founded by Director, Michelle Clark, in March 2017, DOTS is, and the first ‘street ran’ project to provide essential care to homeless peoples’ dogs living on the streets of London.

DOTS reaches out to the homeless community through their “Regular Static Street-run Stations” and brings vital support to the homeless and their dogs in the London boroughs of Westminster, Camden, Shoreditch, East and parts of North London.

These stations offer everything to help Homeless owners care responsibly for their dog. From routine veterinary check ups and on-going vet care for a chronic condition. DOTS also offers emergency care in the event of an accident or trauma.

The stations also provide a regular supply of dog food and essential items to make their street life ‘home from home’. From dog bedding, toys, collars and leads, DOTS also offers a state of the art mobile grooming unit at their ‘stations’.

DOTS relies on the voluntary support of Vets, Vet Nurses, Groomers and Trainers at these ‘Stations’ where the dedicated team provides a lifeline for these street dogs.

Having noticed the ‘Photizo to the Rescue’ campaign in the press, Michelle Clark contacted Photizo’s sole UK distributor, Danetre Health Products, to discuss whether Photizo would help the many elderly dogs on the streets.

The street dogs that DOTS support literally mean everything to their homeless owners. Being out in all weathers and sleeping rough takes its toll. Many are senior Staffordshire Bull Terriers that suffer in the cold and become painfully stiff. With winter approaching I was looking for a solution to help in addition to antiinflammatories.

These dogs are so stoic, they will carry on regardless, not to let their homeless owners down. I am keen to embrace all means of helping our dogs from conventional medicines to herbs and homeopathy. I was interested to learn more about Photizo’s potential, particularly in its ability to reduce pain naturally.

Launched at Crufts earlier this year the aim of ‘Photizo to the Rescue’ was to help rescue centres. Offering the potential of Photizo to speed up the rehabilitation of dogs in their care, these dogs would hopefully find their forever homes more quickly.

Naturally DOTS fitted this criteria and Ruth Milner, MD of Danetre Health Products, was delighted to help, she explained:

When Michelle Clark called I was so moved by their work that we sent a unit next day delivery for the DOTS team to trial. I explained that Photizo is the result of years of research. It uniquely combines the latest advances in LED technology to offer a modern Phototherapy device, which is safe and simple for anyone to use. It would help DOTS in alleviating stiff, arthritic symptoms naturally, but it would also accelerate healing for cut paws from debris and wear and tear on London’s streets.

"Having attended the training seminar on Photizo presented by Brand Ambassador Anna Webb at the DOTS new offices in Enfield, I was keen to start using it and see the results.

The idea of red-light therapy was relatively new to me; however, I was looking forward to seeing how the street dogs reacted to it.

Babe (photo top right), a 10 -year old Staffie who suffers from quite severe osteoarthritis in her legs was the first dog I wanted to try Photizo on.

Babe appeared to welcome the red light on both hind and fore limbs as I focused on her joints, she seemed to visibly relax and enjoy the light therapy, indicating in my opinion some degree of relief from her arthritic pain.

Lola (photo right) another Staffie, who is almost 7, suffers from elbow dysplasia and is having regular hydrotherapy sessions (funded by DOTS), this weightless exercise increases the range of movement in the joints helping to increase muscle tone without putting weight on the joint. I was keen to get her started on the red-light therapy and I did a few doses on one elbow, she was a bit unsure at first but it’s something we are working on! The more used to it she gets, hopefully the more beneficial it will become to her. 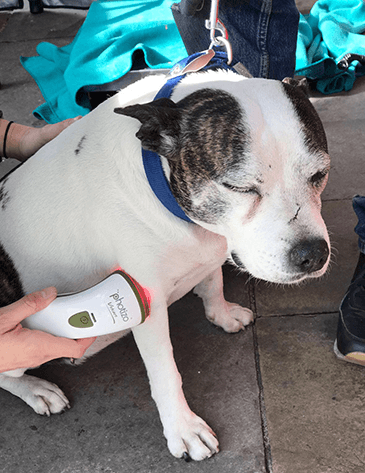 Photizo Vetcare is fairly new to our stations but I’m excited to see the ongoing effects of incorporating it into our regular treatment plans for some of the dogs. If it can provide some much needed pain relief for them and potentially help to reduce some of their doses of anti-inflammatory pain-killers that would be hugely beneficial for them in the long term."

Since its launch in 2013 Photizo Vetcare has made an impact with Vets, Vet Nurses, and Animal Physiotherapists as a powerful non-invasive treatment tool that promotes natural healing across a host of musculoskeletal conditions.

Reducing arthritic symptoms, stiffness, and the effects of age related conditions like Spondylosis, Photizo works by increasing the circulation to the affected areas, which in turn reduces inflammation and offers immediate pain relief.

Photizo Vetcare creates biological effects at a cellular level to stimulate the production of ATP, the cellular energy that is needed for healing and cellular regeneration. The Vetcare also increases the blood supply to the wound, muscles and joints, reducing swelling and inflammation.

Helping with pain relief via the stimulation of endorphin and serotonin secretion, the combination of light treatment with Photizo Vetcare increases the blood and lymph diameter; thereby increasing the removal of debris whilst promoting the inflow of oxygen and nutrients, helping cells to function at optimum levels.

In addition to its analgesic effect, Photizo also releases endorphins and produces a calming effect. DOTS noticed the almost immediate calming effect Photizo created on Poppy (photo above) aged 12 years who suffered extreme separation anxiety when apart from her owner. 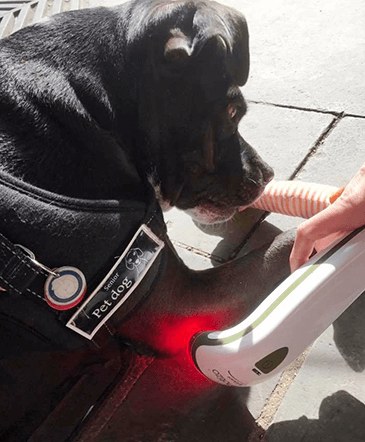 When Poppy’s owner was temporarily hospitalised, she was fostered by Michelle Clark. Using Photizo it noticeably calmed her when she became stressed-out.

Photizo is proving particularly useful for DOTS to use at their ‘stations’ across the capital as it’s such a handy pocket sized device that’s battery operated and totally portable. It’s red light has made quite an impact at their station on the Strand every Sunday with passers by turning heads and attracting attention.

Extremely simple and safe to use with pre-programmed evidence based doses of red and infra-red light, using Photizo there’s no need to use cumbersome eyewear as is necessary with a laser. Unlike a laser beam, which transfers coherent, or near coherent light, LED emits a non-coherent light, which has a greater cover area.

As well as promoting natural repair of musculoskeletal conditions, Photizo also accelerates wound healing, and is used post-operatively to speed up healing.

Apart from reducing inflammation to the wound, it stimulates fibroblast and collagen formation needed for wound closure. Apart from helping to control scar tissue, meaning less scar tissue is formed. Its success in aiding postoperative wound healing has been well documented in South Africa where the Photizo® has been developed by Physiotherapist, Marietjie Venter. Vetcare’s near Infrared light has been shown to increase immune system functioning. This means that a local treatment of a wound has a general immune enhancing effect helping to prevent any infections. In general veterinary work in South Africa the biggest use is bite wounds, chronic necrotic wounds and oozing abscesses; it’s used to clean up septic wounds!

What’s so important is to know how versatile Photizo Vetcare is as a cost effective tool that’s proved itself in veterinary practice in treatment of post-surgical wounds and injuries. I’m sure that Photizo will make an ongoing positive contribution to DOTS and help London’s street dogs stay mobile and healthy for longer. 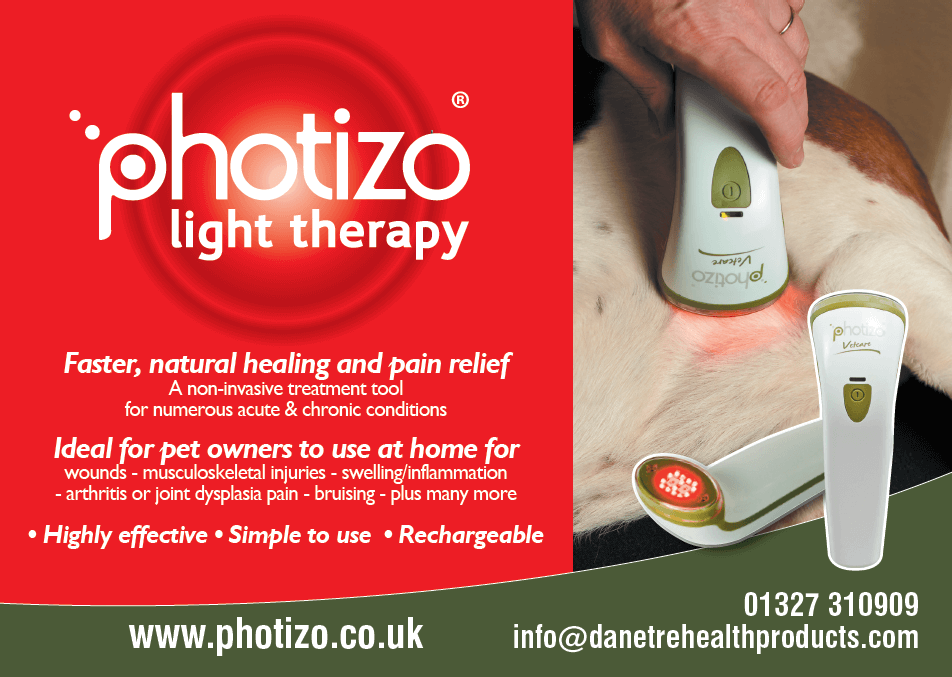 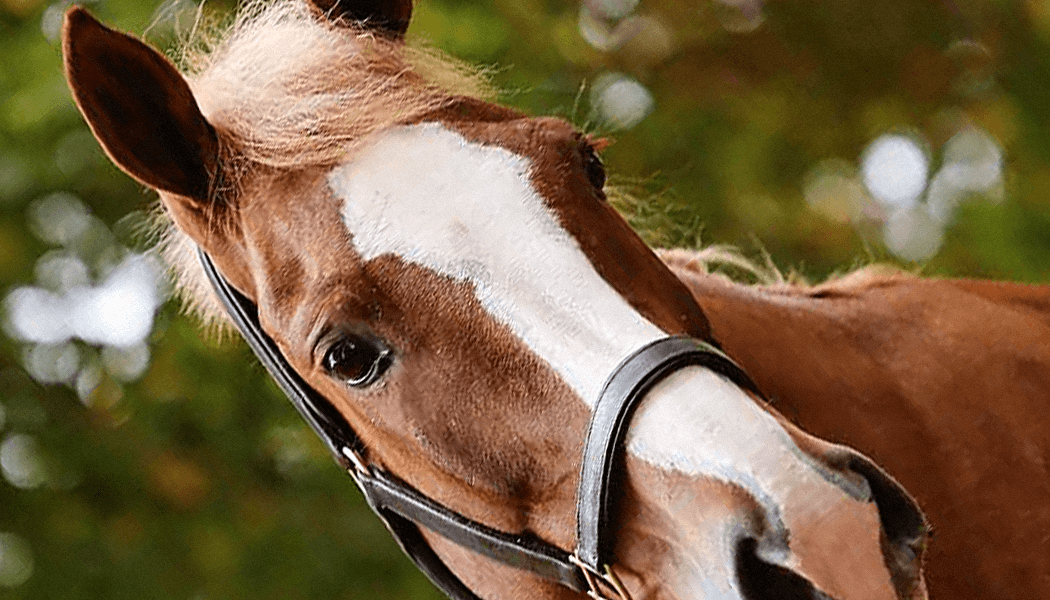 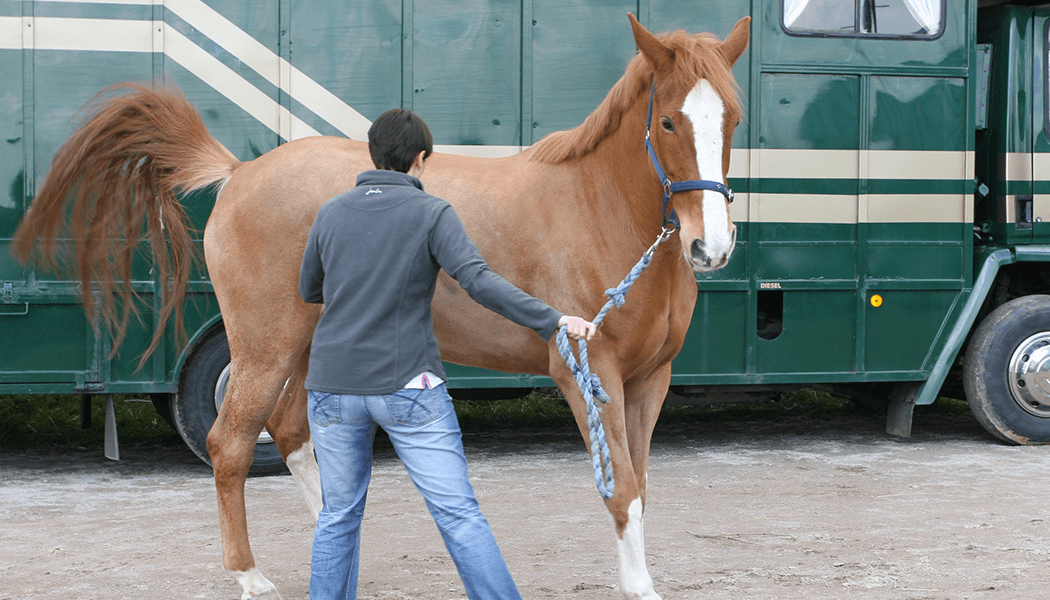 An MSc in Animal Osteopathy