Home›Featured›Is your dog dying of boredom?

Is your dog dying of boredom?

When canine behaviourist Shay Kelly set up his Canine Enrichment group on Facebook this year, little did he imagine it would explode to over 20,000 members in just three months. Dog lovers unite across the world to share ideas on how to keep their dogs happily entertained and find creative ideas to defy boredom. Kelly’s philosophy behind the group is simple, “I have long considered that dogs are easily forgotten when it comes to enrichment and many lead a life of boredom. This would be unacceptable for zoo animals, so why is it acceptable for dogs? I want to promote a better life for dogs and for enrichment to be considered the norm.” Judging by the popularity of the group, today’s pet guardians are more aware of the need to relieve the tedium and monotony that encroaches on many dogs’ lives. 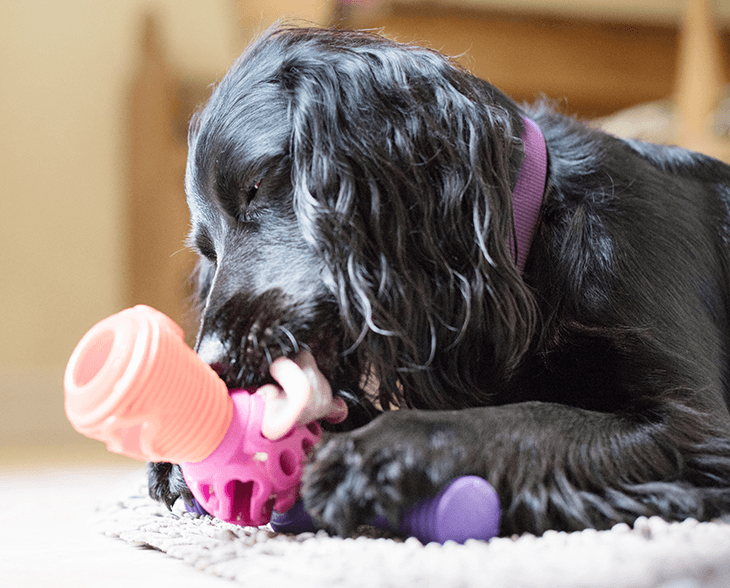 In his article “Lonely pets’ brain cells are dying from boredom” Jonathan Leake, science editor of The Times, cites boredom as one of the “subtlest forms of cruelty” and explains that lack of stimulation damages the brain through neurone atrophy eventually causing cognitive deficits. Although boredom in pets can only be measured subjectively it appears that contributory factors are the lack of opportunity to express natural behaviour, such as hunting for food or carrying out the job for which they were bred, as well as having little control over their environment. Humans find boredom maddening and prisoners describe it as a “a torment and a monster that takes over them.” In dogs, excessive boredom may be associated with stereotypical behaviour for example pacing and displacement activities such as chewing or barking to relieve stress. Recuperating dogs will benefit from enrichment activities that provide relief from the monotony of crate rest and restricted exercise.

The knowledge that enrichment is beneficial for dogs has seen a rise in the number of interactive feeders on the market. The best known is the KongTM that first became available in the 1970s, created by Joe Markham. His German Shepherd Dog adored chewing on a hard rubber car part and Markham replicated this as a chew toy. Today the KongTM Company offers a wide variety of interactive toys to suit every age, size and shape of dog, recognising their different needs.

Research shows dogs are neophiliac and for optimal enrichment toys should be rotated - preferably with calmer activities interspersed with high energy ones. Enrichment does not always need to involve complex puzzle toys either - foraging for treats thrown in the garden might look simple but requires excellent focus and concentration and, with olfaction engaging as much as one eighth of the dog’s brain, seeking food is satisfying and calming. But for enrichment to be beneficial for health and wellbeing it must be enjoyable for the dog and meet the dog’s individual needs.

Introducing an interactive feeder by leaving a dog to figure it out for himself is an approach that should be met with caution as it may lead to frustration. This is a common negative emotional response to puzzle toys that are too difficult or have a low rate of reinforcement. One Cockerpoo owner noticed her dog was showing signs of frustration when an interactive toy dispensed treats infrequently but on switching activity to foraging he immediately became engaged and quiet. There is a perception that frustration is needed for learning resilience and while it may fuel new behaviour, frustration is not necessary for optimal learning. The behaviour associated with frustration may become linked to an enrichment toy if say a bark precedes the food tumbling out, and the bark is then reinforced. With repetition this may become learned behaviour associated with the feeder and become generalised so the dog barks for other food. 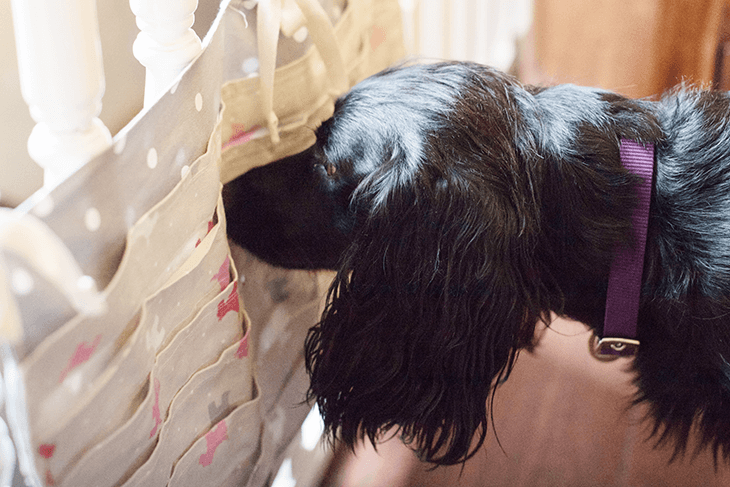 Aside from frustration, enrichment toys evoke different emotional and instinctive responses. Interactive feeders that encourage chasing may be over stimulating for some dogs if they constantly trigger the innate eye-stalk-chase-bite (grab-bite, killbite)eat motor pattern and maintain high arousal levels. On the other hand, those dogs who need more exercise, movement and stimulation will benefit from this type of enrichment.

At the other end of the spectrum is chewing and repetitive licking, which is stress-relieving and pacifying, and releases feel-good endorphins.

Dogs on rehab, with visual or auditory sensory impairment and senior dogs who are hard of hearing and/or have deteriorating eyesight will benefit from foraging, which is usually more pacifying than many interactive treat dispensing toys and offers a high rate of reinforcement. Seeking may calm dogs suffering from cognitive dysfunction and fabric foragers can be sprayed with relaxing scents such as Pet Remedy or Adaptil for additional support.

Not only do interactive feeders enrich mealtimes, they may provide health benefits by improving the appetite of finicky eaters and aid digestion by slowing down those who bolt their food. Veterinary surgeon Dr. Hannah van Velzen was concerned about her mother’s 14-year-old wirehaired Daschund’s eating habits. Trui would either graze or wolf down her food, often resulting in vomiting. On introducing a slow feeding bowl Trui’s appetite increased and she ingested food better. And veterinary nurse Emily Plowright noticed her dog’s confidence increased after introducing mealtime enrichment at home. Not only does George prefer working for his food, she observed an increase in his curiosity and willingness to explore new environments.

Dogs on rehab often have special considerations such as restrictions on the type of weight-bearing exercise they can tolerate, and enrichment products placed on the floor may be unsuitable. Some interactive feeders can be raised to allow for a natural stance with even paw-weight distribution and simultaneously give the benefit of gentle weightbearing exercise and muscle flexion and extension when foraging. Static enrichment toys can also keep a dog stationary and distracted when changing dressings, inspecting wounds and administering medication, and while undertaking husbandry tasks such as grooming and nail clipping. To ensure the dog’s comfort, he should be familiar with the interactive feeder before carrying out any such tasks. Aside from products that can be purchased, there are countless ways to enrich the home environment that aren’t costly. Scatter-feeding kibble around the garden, wrapping treats inside a folded towel, playing hide and seek with biscuits around the house or throwing a handful of food into a cardboard box filled with shredded paper are simple yet cost-effective ways. The only limit is your imagination!

Of course enrichment at home need not involve food. Many dogs love a massage, adore being groomed and relax when listening to classical music, and outdoor enrichment may comprise digging in a sandpit, splashing in a shallow pool and sniffing scented plants in the garden.

The success of Kelly’s Canine Enrichment group is doubtless due to the delight owners feel at seeing their dogs lead more fulfilled lives. And as I spoon my dogs’ food into the 12-holed cupcake tins that are their new dinner bowls, I wonder if Kelly ever imagined he would change the lives of so many dogs. 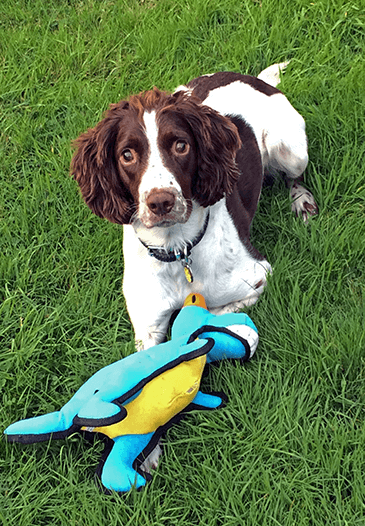 4-year-old English Springer Spaniel Rio is almost completely blind. He has advanced progressive retinal atrophy and was rehomed by Rachel Davies through Dogs Trust in August 2016. Rachel helped him negotiate his new home by leaving the grass longer around walls and trees as natural markers, and placed objects around potential hazards such as a tyre around a washing line post. Through playing games Rachel strengthened Rio’s other senses and built his confidence. Due to neuroplasticity - the brain’s ability to reorganise itself and grow new neural connections after injury and disease - his other senses became heightened.

Rio’s toys were chosen for easy recognition: either for sound (rattle, squeak or rustle) or texture (soft fabric, hard rubber, rough hessian). Each toy is named and Rio recognises them by their unique smell. Rachel observes Rio using toys as markers, strategically placing them to help awareness of his environment, and he carries a soft toy as a "bumper" if uncertain about a new location. Rio can even play catch. Rachel explains,

I use one of his big soft toys and say ‘ready’ before throwing, so he can anticipate and catch it in his mouth or paws - or both. This is his favourite game - perhaps it gives him a sense of normality and memories of his sighted days.

Rachel was keen to learn about other ways to enrich Rio’s home life. With his acute hearing, we discussed how Rio might enjoy listening to relaxing music. Research demonstrates that classical music has a calming effect on dogs and I recommended Rachel reads Through a Dog’s Ear to learn more about music therapy and sound. Rachel reported that meditation music was having a positive effect by helping busy Rio to relax.

Rio is fed moist food and kibble from a bowl. Mealtime enrichment was recommended: a slow-feeder bowl or stuffed KongTM for moist food, and foraging feeder for dried food. It was also suggested he might enjoy the sensory experience of digging in a sandpit.

I recommended Rachel introduces clicker training to Rio. This will practice several skills: increase auditory awareness by listening for the click, improve object location by finding and touching targets, and help proprioception, balance and co-ordination by following a scent on a target stick. For example, rubbing cheese on the flat end of a fly swat acts as a lure to help Rio locate and touch it with his nose. Other recommendations are paw awareness work such as stepping onto yoga blocks or balance pods, and twists and turns and figures of eight - all of which can be taught by following a target stick with a mesh tea ball infuser secured at the end to hold a food lure.

Thanks to Rachel’s mindful support of his needs and her ‘can do’ attitude, Rio leads a rich and active life.

Kate Mallatratt is a founder member of International Canine Behaviourists and is a member of Pet Professional Guild for force-free training. She is author of Home Alone – and Happy! and worked in television as assistant animal trainer for Plimsoll Production. Kate holds an Advanced Diploma in Canine Behaviour Management and specialises in errorless learning, a concept she incorporates into problem prevention, behaviour modification and enriching the home environment for the family dog. Kate has owned and trained dogs for many years and runs her behaviour and training business, Contemplating Canines, in East Devon, UK.

The Influence of Auditory Stimulation on the Behaviour of Dogs Housed in a Rescue Shelter. 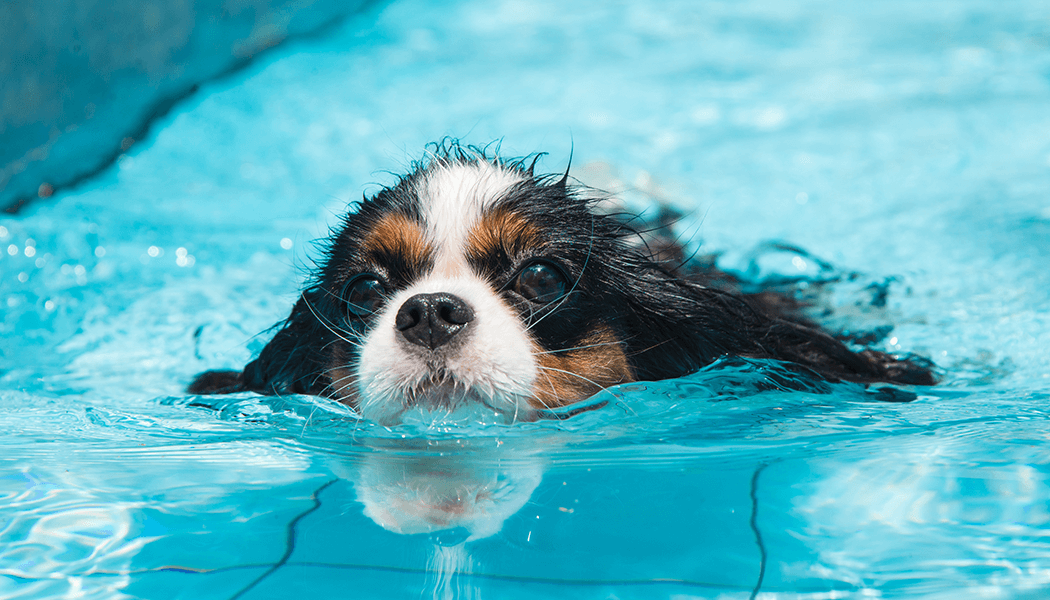 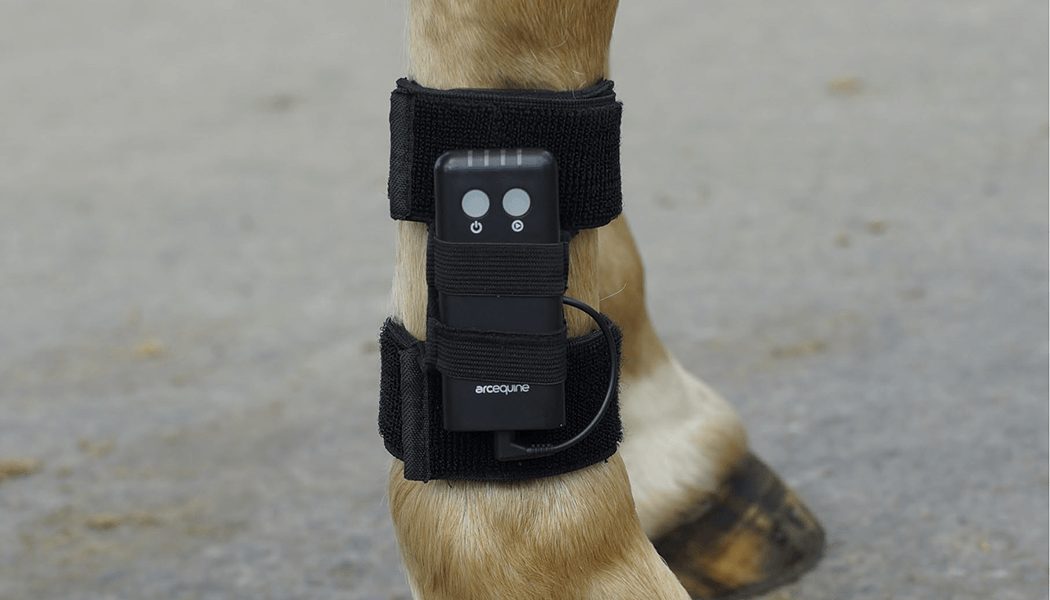