Dogs just want to have fun!

Other therapies
by Animal Therapy Magazine

Play for health and wellbeing

I was quietly reading when I felt a gentle tug on my sock. The sock moved down an inch. Using great precision and carefully minding my toes, the sock was gently pulled off. With a wag of delight and an air of satisfaction Mabel, my golden retriever, rolled on her back and held the sock high in the air with her front paws while grabbing the dangling end with her mouth. Within a minute her daughter Phoebe joined in and they played tug-o-war, stretching my sock to its limit. Watching the dogs act out their mock battle was fascinating: the game did not appear competitive nor serve any purpose: it was pure fun. But is play just about fun? It surely must have a function too, otherwise evolution would have eliminated it.

The function of play 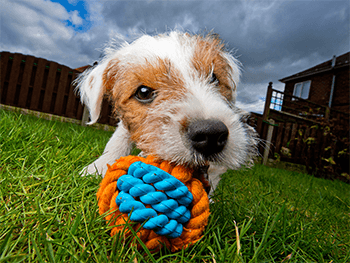 In her book Inside of a Dog: What Dogs See, Smell, and Know: scientist and author Alexandra Horowitz defines play as: “…a voluntary activity incorporating exaggerated, repeated behaviours, extended or truncated in duration, varied in fortitude and atypically combined; and using action patterns that have identifiable, more functional roles, in other contexts.” Play helps to rewire the brain and increases neural connections in the cerebral cortex, and those deprived of the opportunity to play have poorer social skills. Singleton puppies without sibling rivalry to teach them play skills often struggle to interact socially with other dogs in acceptable ways. During play, hormones and neurotransmitters such as dopamine, noradrenaline, oxytocin and endorphins are released, which have positive effects on the body, and dogs who frequently play have lower cortisol levels. The mood of play is contagious, and research shows that stress levels of shelter dogs reduce when listening to recordings of dogs at play[1].

Play is a window into emotions. It is indicative of a positive state of mind and security, and takes place in safe environments when essential needs such as food are met. Play is selfreinforcing, it binds dogs together in friendship and is generally not discriminative of breed. A dog’s ability to self-handicap – to purposely put themselves at a disadvantage and curb their strength - means they can play with dogs of different ages, sizes and generations. Dogs prefer to play in pairs rather than groups and the most common type of social play is play fighting.

Play is essential for mental and physical wellbeing. Puppies start to play pouncing and chasing games when their ears and eyes open around four to five weeks. Play hones social skills and helps to bond animals and people, and requires co-operation. It demands quick decision-making and trust combined with the ability to read the other’s body language and predict what might happen. This could suggest that dogs have theory of mind, in that they understand that other dogs might have different intentions and desires to their own and may think and feel differently: they are self-aware.

The amount of time spent playing declines with maturity and dogs are unusual in that they play into adulthood and beyond. Why they continue to play into later life when they have learned necessary survival skills isn’t certain but its function could be social bonding and/or purely for fun. 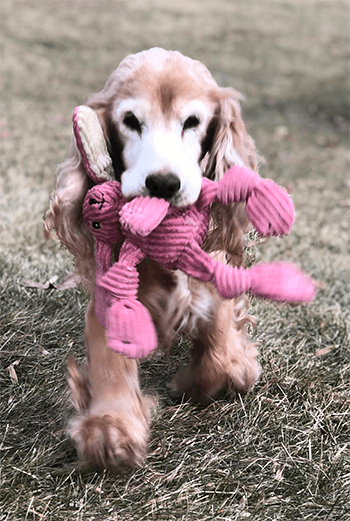 Play is universal, and many of us have seen videos of seemingly incompatible animals who find common ground through play. Some dogs will quite happily amuse themselves with toys, while others prefer to interact with another dog or human. According to dog trainer and journalist Metchild

Play has rules. It frequently starts with an introductory play bow and roles are often reversed. If play gets out of hand – perhaps one dog bites a little harder than he should – there are shake-off or play bow ‘apologies’ or other pauses such as sniffing, sneezing, yawning, scratching and licking.

However, play is not without risk. It expends energy, takes focus away from the environment and potential predators, and could possibly escalate into a fight risking injury (although it rarely does). If play escalates, it may need to be interrupted. If one dog is clearly more assertive, a consent test is a useful measure of whether the ‘underdog’ is happy: stop the play and see if he returns to the game.

Play is influenced by selective breeding, which has exaggerated certain physical and psychological traits. For instance, Dachshunds like digging games, bite-shaking toys, hiding and attacking. Border Collies enjoy tug and ball games involving movement, which they like to stop. To take a ball off a collie, start playing with a second ball by rolling it around with your feet and shortly your collie will drop the ball in his mouth and focus on the moving one. Some physical characteristics can negatively influence play, especially where selective breeding makes reading facial expressions difficult, inhibits ear movement or impedes tail communication. The ‘collie eye’ stare can be misinterpreted by other dogs and make them feel threatened. Play is a powerful reinforcer of behaviour with some dogs preferring to work for a toy rather than food, and tug is a game enjoyed by many dogs.

All games need boundaries and tug is no exception. Keep a tug toy that is reserved only for play with you to maintain interest and value. With NO instructions, wait for your dog to offer a calm behaviour of his choice and when he is showing good self-control start your tug game. Waiting for the game to start teaches impulse control. 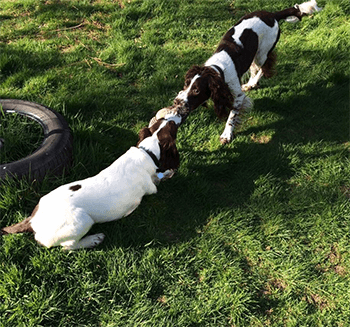 Releasing a toy is counter-instinctive although it can of course be trained. To teach a clean release of the tug, a verbal cue isn’t necessary. Gently hold your dog’s collar under the chin to stop him backing away, while holding the tug still. The tug MUST be ‘dead’ for your dog to release it; if still moving it’s ‘alive’ and if this was prey he could lose his well-earned dinner by letting go. Pulling will only increase his grip. Be patient! Some dogs - especially terriers – are quite determined to hang on, which of course is a perfect skill for ratting. When the tug is lifeless, you will notice the eyes soften, the body become less tense, the jaws relax and finally the grip is released. Calmly take the tug. Even if your dog has your best shoe, follow this protocol - your shoe must be ‘dead’ for your dog to release it. 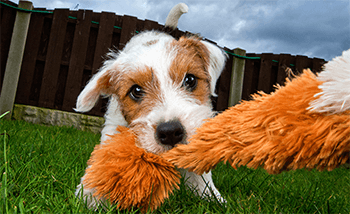 When shopping for a tug, look for one with a strong bungee handle to help prevent injury and jarring of the dog’s neck and your shoulders/ wrists, which can occur from rope tugs that have no ‘give’. A large bite area helps passionate ‘tuggers’ to get a good grip, and food bag tugs can entice the more reluctant dogs. Gun dogs especially enjoy holding large, soft objects and part of tug play can include allowing the dog to carry the toy afterwards. Bull dog breeds enjoy the tugging part of the game and terriers will often love running after a chaser tug before catching and ‘killing’ it.

Some types of play incur a high risk of injury, especially repetitive behaviours such as throwing a ball and dogs can become unhealthily obsessed especially by automatic ball launchers. Driven by instinct they may chase to the point of exhaustion. These types of games include predatory sequences and can become addictive, keeping dogs in a state of arousal and are contraindicated in dogs who are already over-aroused and reactive. The sharp skidding halts to grab the ball puts pressure on the joints and risks repetitive strain and cruciate injuries.

Alternative games on walks can involve nose work: hunting for a ball, toy or treats, or following a track, and these are activities that engage mind, body and soul with the thrill of the find without the danger of chase.

Personality and creativity are often expressed through play and Mabel’s daughter Phoebe is no exception. She entertains herself on walks by plunging her head into the stream like a kingfisher diving for a fish and pulling out a large stone. After parading around she drops it on the grass and playfully pounces on it. Next, she digs at the stone, and finally picks it up again to carry to a new spot, and the game begins again. She is blissfully happy and there is little doubt that her purpose is the thrill of play. Marc Bekoff, professor emeritus of Ecology and Evolutionary Biology says we “train too much and play too little”, and maybe we should all take a leaf out of our dog’s book and play more. 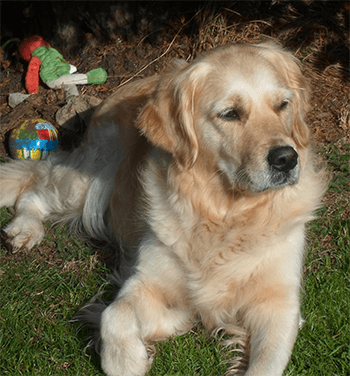 Sherri Steel, owner of seven year old Golden Retriever, Sophie, describes the many ways Sophie encourages the family to engage in play with her. “Sophie brings me teddies and then waits for me to do something. Sometimes she rolls a little soft ball at my feet. She often teases us by holding something in her mouth and as we go to take it she’ll move away a tiny, tiny bit so we can’t quite reach it. Sophie will pull down her feeding mat, offer a play bow with something in her mouth or pretend she wants to go outside and then run inside with her ears up (ho ho!), which I’m sure she finds amusing. She’ll show me where her games are kept and ask to play, and nudge her wobble cushion. Sophie rolls on her back and looks at us upside down with her feet in the air and shows her front teeth until we all laugh at her and say “Ooh! Look at Sophie!!”. We rub her tummy and get on the floor with her - that’s definitely about making us laugh. She looks from one person to another until we’ve all looked back at her and laughed at her! She likes doing this even if we don’t always play - just to get the laugh, and the attention too I suppose. She steals socks and then comes and shows us, with her ears all slicked back and with big eyes and we laugh, and she teases us with them. It’s not just that she wants us to laugh and play, I feel she finds these things amusing too.”

Kate Mallatratt is a founder member of International Canine Behaviourists and is a member of Pet Professional Guild for force-free training. She is author of Home Alone – and Happy! and worked in television as assistant animal trainer for Plimsoll Production. Kate holds an Advanced Diploma in Canine Behaviour Management and specialises in errorless learning, a concept she incorporates into problem prevention, behaviour modification and enriching the home environment for the family dog. Kate has owned and trained dogs for many years and runs her behaviour and training business, Contemplating Canines, in East Devon, UK. 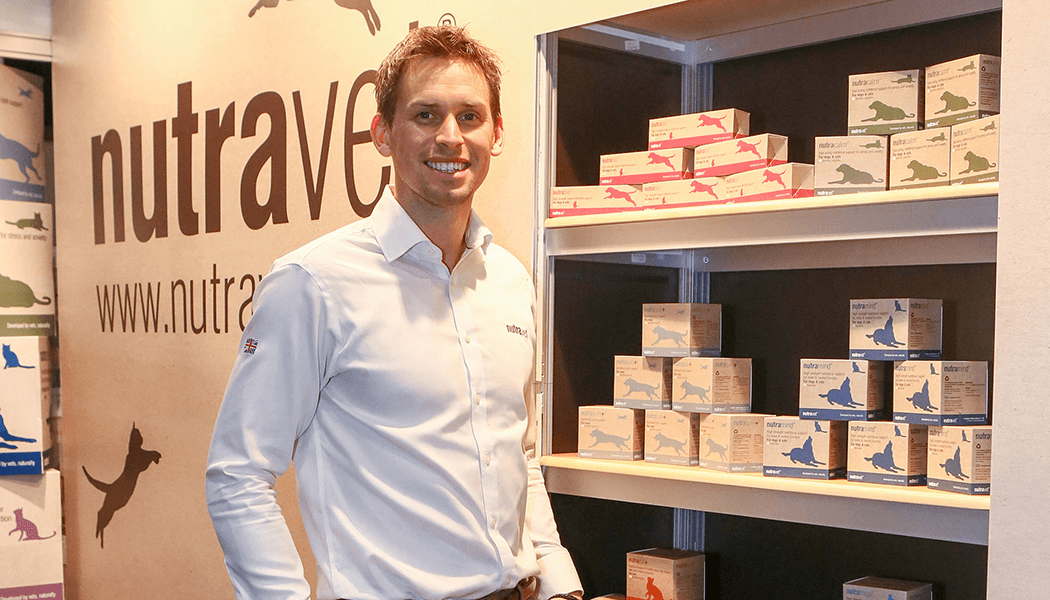 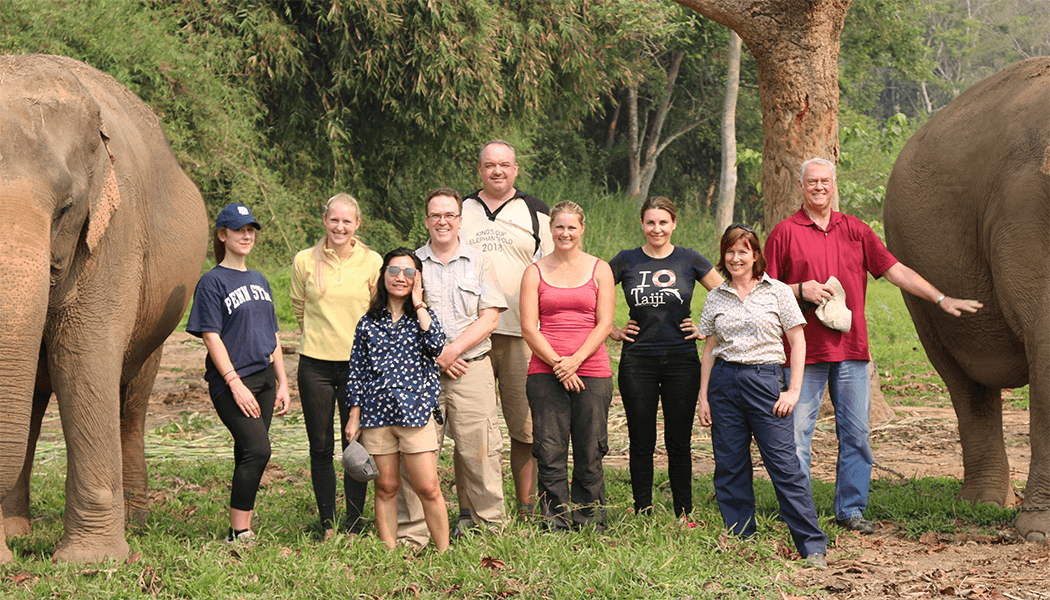 Why do we need to treat Elephants?