Thor, the beloved pet of Sophie and Kyle, is 4 year old Czech Wolfdog x Belgian Malinois. One of his greatest joys is walking in the woods and playing with his sister, Belle, so when he stopped wanting to play, and started slowing down on his walks, Sophie was rightly concerned. In addition to changes in his gait and posture, she noticed:

A visit to the vet revealed no orthopaedic issues so Thor’s issues were veterinary diagnosed as muscular in origin – and likely to get worse if not addressed. Because he’s still such a young dog Sophie wanted to guard against a worsening of his condition as he got older and, not keen to put him on painkillers, she decided to investigate a complementary therapy approach.

When she contacted me, Sophie had already heard good reports about the treatments offered by comprehensively trained Canine Massage Guild therapists. As students we undergo intensive study for two years and must be proficient in four disciplines of canine massage as well as the Lenton Method™ (currently the subject of clinical trials at two major universities), a threepronged approach that incorporates advanced palpation skills, BodyMapping, and ‘The 7 Protocols’, a unique set of myofascial release techniques for long-lasting results. 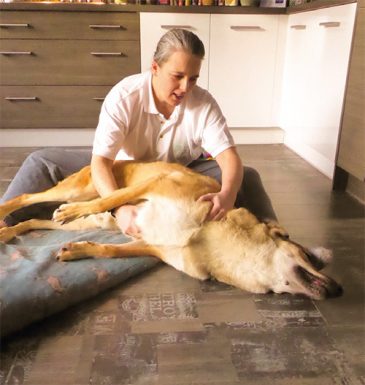 Before his first treatment Sophie told me that Thor liked to fidget, generally didn’t sit still for long when being groomed and could find touch challenging. She was apprehensive of how I would cope if he didn’t settle for me, a common concern of many owners who consider bodywork for their dogs. However, as part of our training we learn to work with our canine clients in positions they are comfortable with and this forms a bond of trust that enables the therapy to take place. Sophie’s concerns of Thor not settling were put to rest when he began to relax during the first treatment. In fact, the session ended with him falling fast asleep once the most uncomfortable areas had been treated.

We started the first treatment with an in-depth consultation about Thor’s medical history, his diet, any supplements he was taking and how and when his issues presented. I then spent time assessing Thor and palpating his muscles. It was at this point that the story started to unravel...

During this initial process it was obvious that Thor had multiple areas of myofascial pain with associated fasciculations and local twitch responses. Several muscle groups were showing signs of hypertonicity and he displayed poor range of movement in his right foreleg in both passive and active extension.

It is contrary to the Canine Massage Guild’s ethos to continue to treat a dog that is showing no sign of improvement. In fact, we say that the dog should start to show improvements within 1-3 sessions or will be referred back to the vet with this type of results driven treatment. There was no danger of that in Thor’s case, however. Visible signs of improvement were seem after just his second session. During his treatments, I used specific myofascial release techniques from the Lenton Method to release painful, bound muscles and fascia to not only promote correct movement but also to reduce, and hopefully, eliminate, the pain.

Clinical massage is a bespoke therapy - we don’t follow a routine - and it is important to remember that techniques suitable for one dog may not be for another. Many dogs are very co-operative and Thor presented me with the areas he wanted treated. We then progressed easily through the rest of the session to address all areas of injury and dysfunction.

After just 3 sessions, Sophie said, “Thor has been suffering with a daily limp which would appear intermittently throughout the day on his front right shoulder for a few years now, but after his second session with Louise it not only disappeared but it hasn’t come back since, even when running and chasing squirrels! I really feel like I’ve got my boy back!”

The results of the clinical canine massage sessions include:

Thor continues to have maintenance treatments with me and is loving his unrestricted life again. Sophie is amazed how relaxed he is during treatment and went on to say, “Louise is fantastic! She makes Thor feel very comfortable and gives him the choice of treatment location and position. It’s amazing to see them actually work together, and how she continually reads meaning in his interactions to make it as comfortable as possible for him. I still can’t believe the results!! I was feeling at a real loss before this and now I’ve got my dog back. I’d wholeheartedly recommend this therapy to any owner who has concerns about their dog’s mobility and quality of life”.

As a former Rugby professional I received regular massage throughout my career to keep me performing at my peak so, really, it shouldn’t continue to amaze me how quickly and dramatically a dog responds to clinical canine massage, but it still does. To see a young dog like Thor who was struggling and becoming old before his time have his life turned round and get his zest back within a few treatments is humbling. Being able to make such a huge difference to not only the life of a dog but their owner is a real honour. This is truly the most rewarding career.

The Lenton Method is currently being trialled by Winchester University and Sparsholt University in the world’s first ever clinical trials in canine massage therapy. The official online register of Clinical Canine Massage Therapists can be found at www.k9-massageguild.co.uk 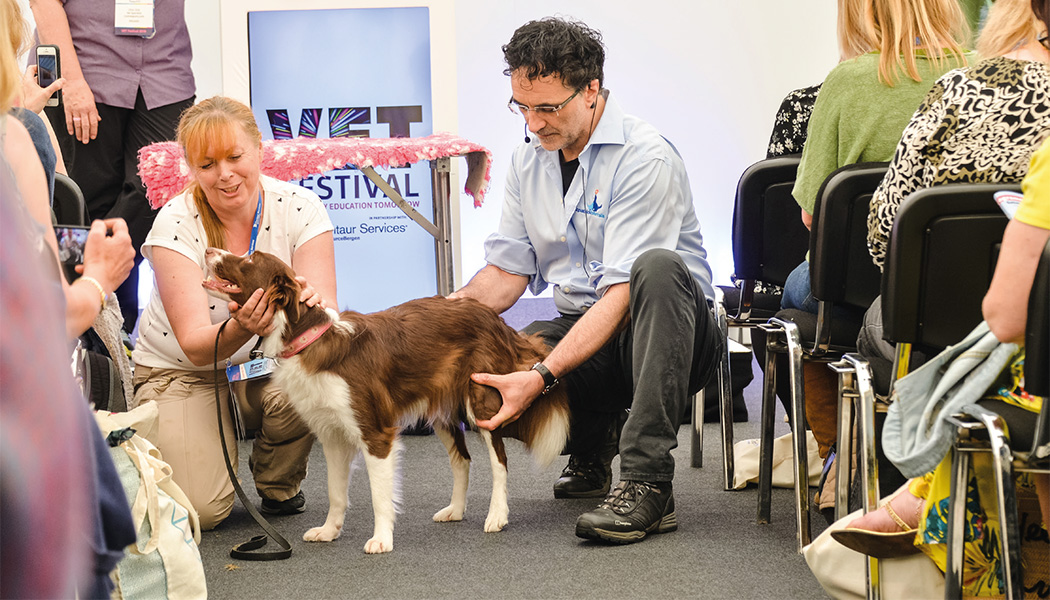 What’s the Deal with Wellness?

All animals deserve therapy and all animals can be

In this article, Dr Alison Wills and Alice Sear lo

We have some fantastic case studies in this issue,

Huge thanks to @trimbio_ltd for their on going sup

We are live. We have case studies featuring dogs,

Supplements. Where do you start? Many thanks to

Huge thanks to Dr Jane Williams and Tanja Bornmann

Have you heard about Walker & Drake’s cold press